Marcie's dad had pulled into a roadside rest area, directly in front of some picnic tables. To the side were restrooms. Bushes partially obstructed the view from the two-lane highway. The bus completely obstructed anyone travelling by on the road from seeing the tables. And, fortunately for our embarrassed and still hard husbands, no one else was about. But then, the highway itself wasn't very busy at the moment.
It was hilarious, Dear Diary. The parents made our husbands go to the restroom, in their teams of two, still rubbing away all the way there and back. When one team returned to the tables, the next team ventured out. The first team of Ray and Justin managed their round trip without a car passing by. Unfortunately for Teddy and Kenny, a car on the far side sped by as they were returning, just as they reached a gap in the bushes. As fast as the car was going, and being on the other side, I don't think the occupants really saw anything, but from their red faces, mine and Rachel's husbands sure did think so!
Charlie and Dickie were our unlucky duo. Just as they left the men's room, a car pulled up in front of the building. Two women - a mother, and a daughter who looked about 19-20 - and one young man who looked about 21, were inside.To their credit, and our delight, our two lads, heads down, wanking each other, marched back to the tables.
By now, Marcie's parents had worked out the spankings. Which they promptly announced. Our five original brats had each come twice, so that would be two spankings each from Mr. Melick for cumming on his bus, and a total of three each
from the "Wives Brigade", as Kathy now dubbed us, one for each cum and one for the time they made their partner cum.
Kenny was the lucky one in all this, having only come once, when my husband had been jerking him off. So the little prick was getting off easy, one spanking from Mr. Melick and two from the Brigade. But Marcie, supported by her mom, had
other ideas. She added another from his uncle-in-law for his "disrespect" when he first boarded the bus.
"No way, it's not fair!" the crying Kenny loudly protested to his wife, cousin, mom, aunt, us and the whole world.
"Well, that's too bad," replied Marcie, "and you just earned one more from your wife for protesting. Care for some more, little boy?"
"No, Marcie, ma'am," mumbled her sobbing cousin.
The parents organized everything. As between them, our husbands had 18 spankings due from us girls, we were each assigned three to give. The parents tried to make it so that us young wives got a go with boys we hadn't spanked before, so I had Kenny, Charlie and Justin. I sure was disappointed not to get a go on Ray's firm behind! 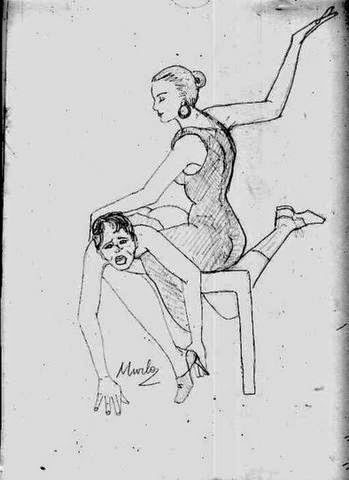 Marcie's dad would give each husband one spanking with his belt, splitting the others they had coming between the other adults, two apiece. Each spanking would be hand smacks equal to the husband's age.
So very soon, we had a spanking marathon going on full swing, a real "spankathon." Oh my, Dear Diary, the screaming, shouting, howling, wailing and just plain crying was unbelievable, especially when Mr Melick's thick leather belt was cracking down on their bare behinds! I was almost sorry I hadn't brought my ear plugs, but on the other hand, that racket our husbands were making was music to my ears. 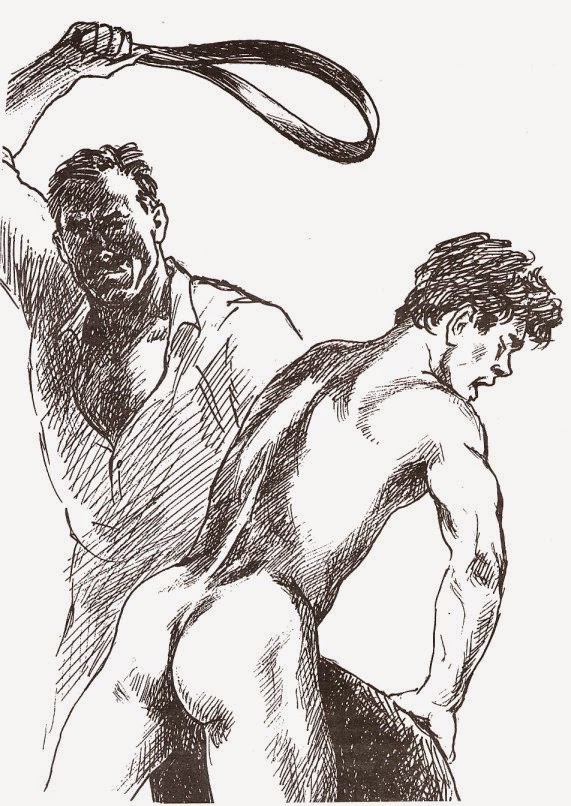 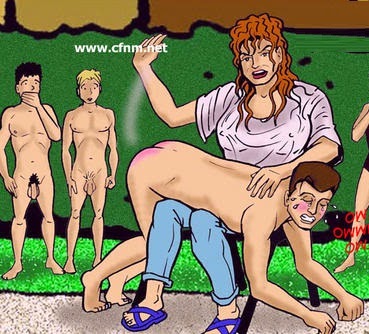 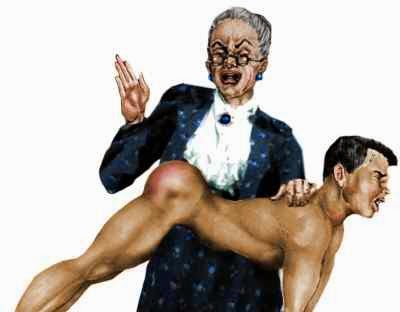 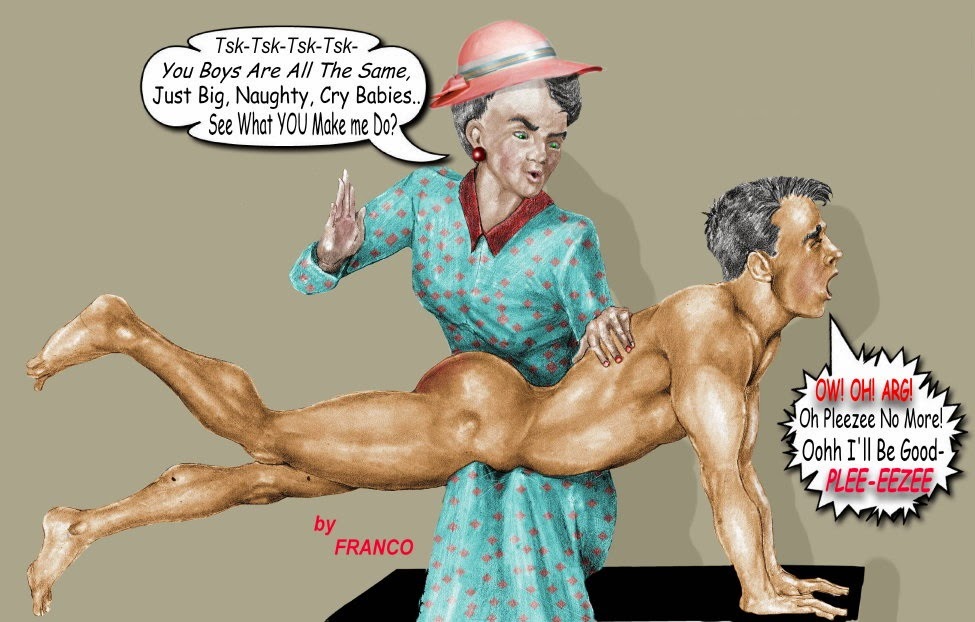 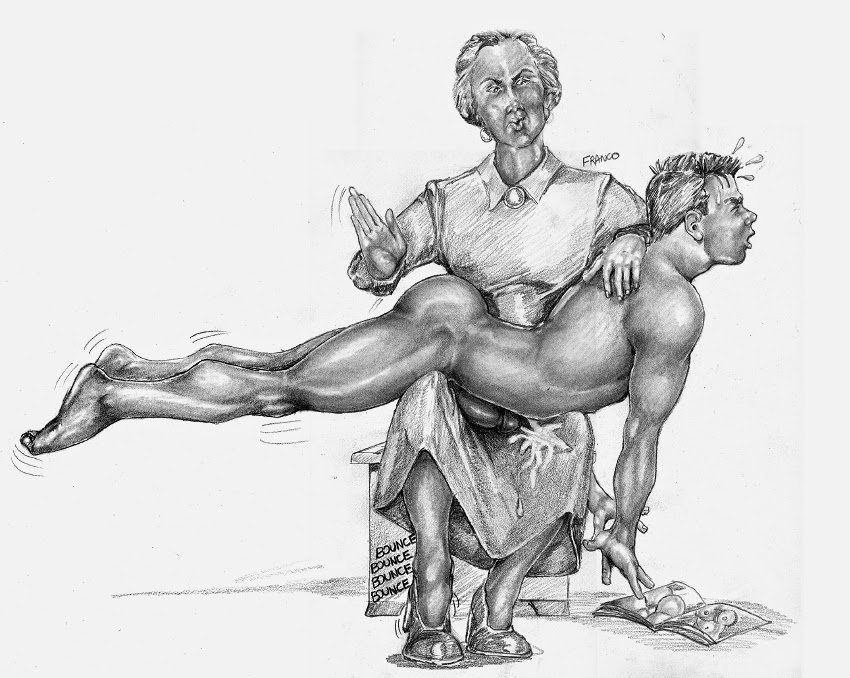 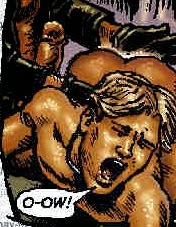 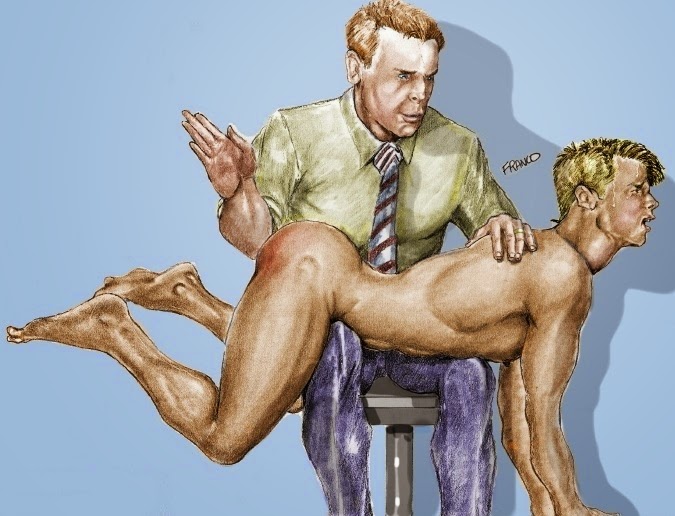 Our red bottomed troupe put on a wonderful dance performance, doing a much better "Full Monty" than the guys in that movie. I just loved all those dicks and balls bouncing all over the place! Our crew even out danced those Chippendale dudes!
A little after thirty minutes, our "rest" stop was over. As I was getting on the bus, I spotted the family that Charlie and Dickie had encountered at the restrooms. I had been so engrossed with our naked bus boys that I hadn't noticed that this family had stayed around for our entire show.
I know I shouldn't say it, but they kind of looked like rednecks. The mom and daughter were both BIG with huge tits and asses, which they proudly showed off in low-cut tops, cut-off denim shorts and high heels. The guy was a real skinny little runt in comparison.
"Now, that's what we should do to your husband when he pulls his shenanigans," I overheard the mother tell her daughter.
"No momma, no," stammered the skinny guy.
The moms in our group went over to talk to the other mom. Mrs. Melick wrote something on a piece of paper, handing it the lady. Her son was still whimpering. Jeez, what a baby! No one had touched him, he had all his clothes on, he wasn't hurting, but he was complaining.
The family headed toward their car, our moms boarded the bus. From my window, I could see the guy's wife and mother starting to strip him. At least now, he'd have something to cry about! 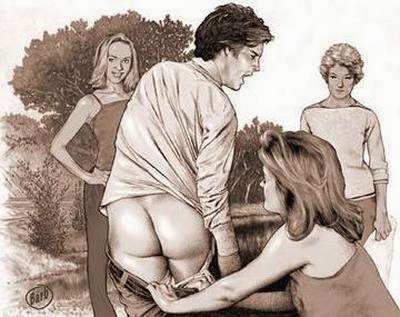 And then we were off to the retreat, the wonderful retreat. The four mommies suggested that we let our husbands rest their dicks the remainder of the way, so they would be fully ready for all the surprises awaiting them. But the telling of that will have to wait till next time, Dear Diary...
Posted by QBuzz at 11:18