It surely is the worst nightmare for a successful middle-class white male... You've worked hard and bought a nice house for your family, in a nice area far away from the lower-class scum... only to be awakened in the middle of the night to find that you and your family are at the mercy of masked, armed and dangerous men! 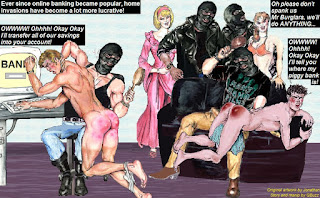 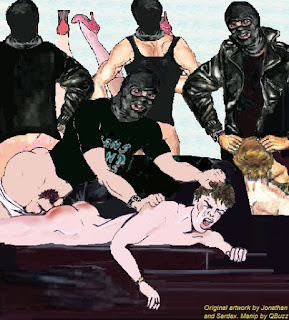 The trouble with owning a nice big house in a well-off area with a flash car on the driveway is that everything looks extremely enticing for criminals! And of course long, agonizing bare-bottom spankings are the best way for burglars to make sure pampered middle-class homeowners tell them where ALL the valuables are!
Of course, most ne'er-do-wells would probably rob the house while the wealthy residents are out, perhaps carolling or at a worthy charitable event.
But for a certain class of the cruellest criminals, the presence of the unfortunate family would be an added bonus... not only do they get their pick of the cash and valuables, they also get their pick of the family members' soft hot holes!

Just imagine what it would be like to awaken to find four hulking masked men in your home – with four thick throbbing criminal cocks that need servicing! Obviously the boys would find it a lot more traumatic than the girls... even though those big convict cocks will soon be awakening the familiar bi-curious desires that all nice middle-class boys have...
I changed one of the captions to 'We will do anything you say' from 'My daughter and I will do anything you say', just in case you wanted to imagine the younger woman is the son's fiancee or girlfriend, rather than the daughter.
Whatever her relation, the cruelty of this scenario only becomes even more uncomfortably thrilling the more you think about the implications. This robbery has probably come at the worse possible time for a middle-class family, what with college funds and weddings and all!

No doubt the ladies already fantasized about what it would be like to be ravished by a lower-class ruffian, and now they've experienced it for real who's to say they won't be sneaking over to the wrong side of the tracks to get a regular dose of working-class cock!
Perhaps the son will turn to low-level drug dealing at college to fund his education, only to get caught and thrown in jail with lots of men just like the guys who broke into his house!
Maybe his father, in an attempt to maintain the middle-class lifestyle to which his family is accustomed, foolishly starts embezelling funds at his white-collar job. Of course he gets caught (middle-class whiteboys really aren't very good at crime) and thrown in jail as well! Perhaps he will pass his son's cell and get a glimpse of him with cocks in his mouth and ass as he is taken to meet his own Prison Daddies...

And with the boys in jail getting abused and buggered, the ladies will be home alone... which the original robbers will no doubt hear about through the prison grapevine... and decide to revisit the scene of the crime. There may not be anything left to steal, but there will be two lonely ladies absolutely ravenous for another taste of their big criminal cocks!
Posted by QBuzz at 15:51 8 comments: