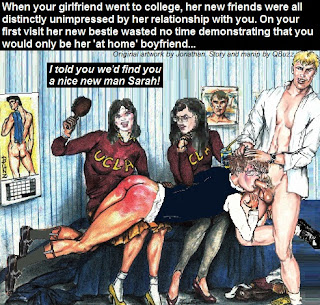 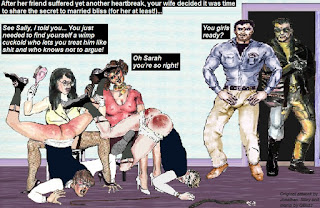 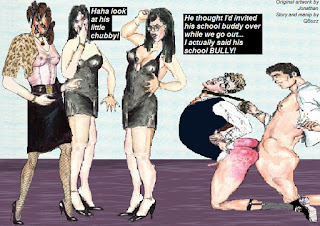 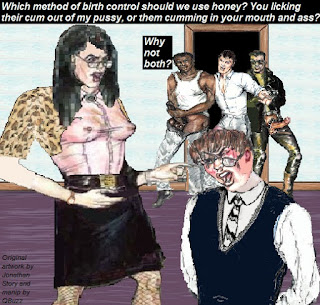 This was originally supposed to be pictures of four completely separate couples, but it ended up showing the same cuckold couple each time. This is because the first manip is actually inspired by my own college girlfriend, whose friends similarly urged her to replace me with a more impressive man. She was also not shy of pointing out men at her college who she wouldn't mind having sex with! I don't know if she ever cuckolded me with one (or more) of them, but given that we were apart for weeks at time, there's a rather good chance! So the rest of this series is kinda what I fantasize the rest of my life would have been like had I stayed with her.
The preppy outfit the husband wears (sweater vest, shirt, tie, tight trousers, shiny shoes, socks with garters, glasses) is an outfit I love to wear when I am to be thrashed with a cane or fucked in my ass with a big black dildo. It's a great outfit for a submissive male to wear because, unlike a school uniform for instance, you can wear it out in public and so feel like a complete submissive dork as your powerful lady treats herself with your credit card.
Stereotypically it is the male half of couples who is into kinky sex, and has to persuade his female partner to get involved. But there must be many couples with a sadistic wife who takes great pleasure in humiliating her husband and fucking other men, and a husband who doesn't really enjoy being dominated or cuckolded but who is so in love with her and desperate to be with her that he will do anything to satisfy her darkest desires. He may not enjoy being spanked, or fucked with a strapon, or watching his wife with other men, or sucking other men's cocks, or letting them fuck him in the ass for his wife's amusement. But his wife enjoys it, and so he knows he has to do it or else she will leave him. After all, there are clearly plenty of other men she could be with!
Posted by QBuzz at 06:54 15 comments: