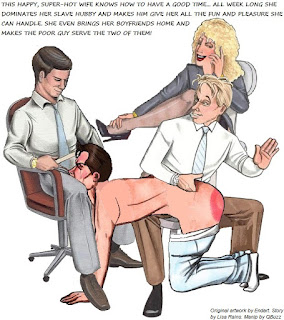 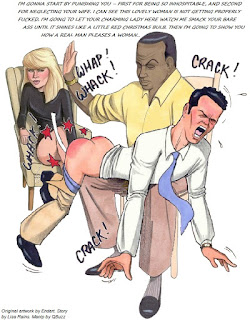 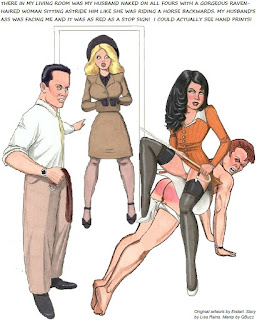 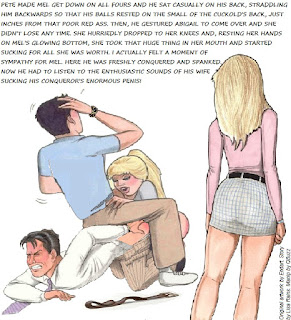 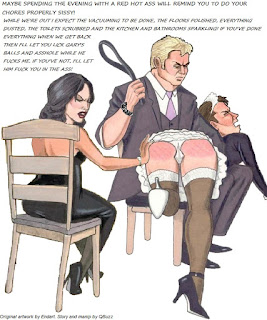 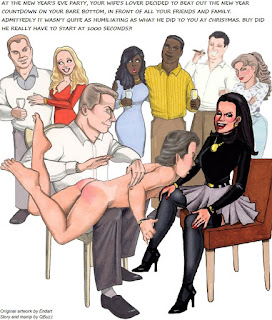 The first four of these are inspired by stories by Lisa Rains. The relevant stories are 'All Week Long', 'Amen Sister', 'Weekend with Elizabeth and Charlie' and 'Abby's Swingin' Good Time' respectively.
I love the way these stories capture the abject humiliation of being soundly spanked by your wife's bull, and I hope the pictures capture that too! There certainly must be an extra layer of dread for the submissive cuckold whose wife gets off on watching hot gay spanking and sex. While she is out having fun, you are wondering (perhaps as you desperately attempt to clean the house to her impossible standards in your sissy maid uniform) not just if she will get fucked while she's out or bring her lovers home to fuck her in your marriage bed, but whether she will also make you put on a sexy show so she can watch and play with herself as you get your ass spanked by big strong men and have to suck on strange cock, and maybe more! (And perhaps it won't be strange cock - what if she runs in to some of your office colleagues or your old schoolmates while she's out manhunting?!)
The last two manips were inspired by the Christmas and New Year party season. I wonder how many naughty wives were out at parties, dressed to the nines, flirting their way to a sound fucking from a seasonal stud or two (or three!). How many would shamelessly attend parties with their lovers while their submissive husbands waited at home? And how many of those wives would have had husbands who were fully aware of what was going on, but were powerless to stop it? Perhaps the man fucking his wife was the boss, or perhaps he knew that the big strong bull wouldn't hesitate to strip a wimp husband naked and spank him hard in front of everyone!
For a supposedly-straight middle-class husband, having to go across another man's lap and get your bare bottom smacked like a little boy is incredibly embarrassing in itself, but to have it done in front of your wife, her friend, or even a whole audience of partygoers would just be the height of humiliation. And your wife's big strong lover would be all-too-eager to stamp his authority, so he'd spank you mercilessly, first with his hand to show off his strength, then with his belt (perhaps the greatest symbol of male domination), then maybe with your wife's hairbrush or your dad's old paddle? Whatever he uses, it won't be long till you're howling and writhing in agony, beating your little fists against the floor and begging for mercy as you kick your legs, showing off your cute little butthole and slim little penis, demonstrating to your wife and any other spectators exactly why she's taking a properly-endowed man as a lover while you are relegated to foot rubs and fluffing and many other classic cuckold duties!
Posted by QBuzz at 05:54 17 comments: