Rookie in the Trash: what happened next... (Jonathan art manips)

Oh come on, you knew how this was going to go... As soon as I created two manip series based on Jonathan's seminal (with the emphasis on semen!) 'Rookie' series, I was always going to want to create manips showing 'what happened next...'
But let's start at the at the beginning... The first pic in the series (which I have seen titled 'Rookie', 'Rookie in the Trash' and 'Rookie in the Deep End') is of course an outstanding spanking scene, with the detail of those big pink handprints across the unfortunate officer's tormented buttocks. He also appears to have been restrained with his own handcuffs, and is being abused across the hood of his own patrol car, which are both great little details. 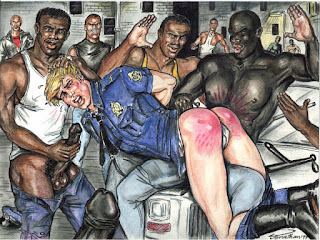 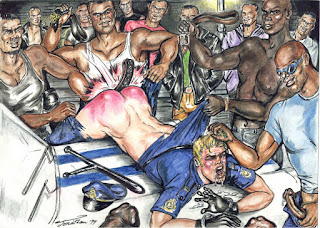 But what really makes this stand out is the depiction of the thick white spunk running from the young man's mouth and lips and chin. Jonathan's art often implies that blowjobs or assfuckings might follow the spanking, but I don't think he ever created anything else quite so explicit. The idea of an overpowered straight guy with a mouth full of other men's cum is one of the ultimate submissive images, and I don't think I've seen it portrayed as well as it is here!
Despite the intensity of the young man's predicament, I always thought this second piece had a slightly lighter tone, mainly because the black men don't look quite so menacing as elsewhere.
My most common interpretation of the story behind this series is that the Rookie accidentally ventured into the wrong neighbourhood (or was unwittingly sent there by his cruel fellow officers!) and was accosted (to put it mildly) by a black gang. But looking at this second pic, perhaps it's not a black gang, but a gay gang who happens to be black, and this is what they do to whiteboys who 'accidentally' stray into the LGBT quarter. Is there something about the Rookie's pose, with his hands cuffed in front of him now rather than behind, that suggests he is consenting to the experience?
Personally I prefer the interpretation that this is a gang of ballbusting black gangbangers who consider themselves straight because they're never on the receiving end, but you never know...
And besides, the third pic certainly returns to the air of menace of the first pic... 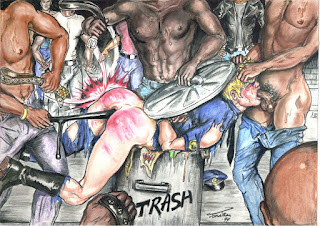 For only the second time in Jonathan's archive, we get to see a cock being sucked - and this time it's a thick black one in a soft white mouth! I'm not sure whether the Rookie's dick is flaccid or erect in the confines of that filthy garbage can, but he must be in some discomfort as his welted ass is probed with his own billy club (I believe there was a scandal in the 1990s where a young man was violated by police officers in a similar way, so perhaps this is a reference to that?)
There's plenty of delicious symbolism all the way through. After getting violated with his billy club he'll no doubt be getting fucked in the ass (maybe by a black guy called Billy?)
Except we don't get to see that, because the series ends there. I do wonder why Jonathan decided to merely tease the forthcoming anal sex when he had already created the most spectacular gay oral sex artwork in history in the second pic. Although maybe the first and third pics' air of menance is more to do with the fact that the cocksucking and assfucking is merely implied, rather than the appearance of the black men?
Either way, I couldn't resist continuing the scene, and you won't be surprised to discover that it wasn't too big a step for the black guy who was probing the Rookie's ass to pull down his pants and stick his Big Black Dick into the young cop's enticing white butthole! 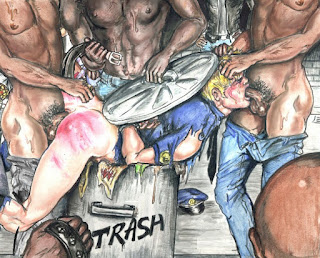 Being stuffed at both ends by big black cocks (while in uniform no less) is the stuff submissive whiteboy dreams are made of! And of course those thrusting black cocks will soon be shooting their loads, and you'll be feeling (and tasting) another man's ejaculation! 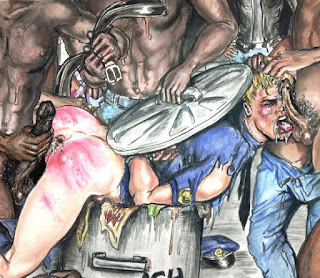 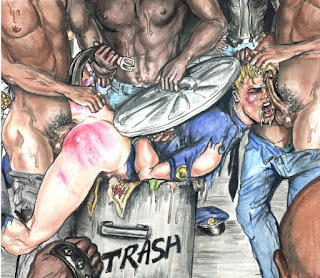 And as he is fucked the groans that emerge from his soft white mouth are just too enticing for the next in the long line of waiting black cocks... 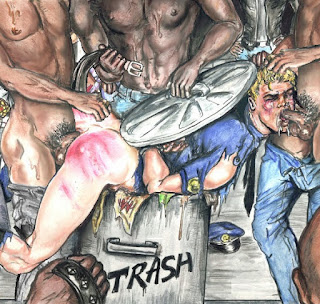 It's certainly going to be a long night!
Bear in mind that this series was was of the first examples of gay porn I came across (quite literally) when I was nervously browsing the darker parts of the web as a teenager. And it clearly had an impact!
This is truly the sort of scene that bi-curious boys like me dream of when we're jacking our little white dicks at night...
Being spanked until the pain of penetration feels like pleasure in our scorching asses...
Our submissive clothing torn as we are placed in humiliating positions for the amusement of more dominant men...
And of course, the feeling of pulsing, spurting cocks in our mouths and assholes!
Posted by QBuzz at 03:43 17 comments: