Earlier in the year, while struggling for inspiration for a new manip series, I contacted Julie Delmar of the excellent Strict Julie Spanks blog to ask if she had any ideas that I could use. Sure enough, she asked me if I could create a series based on one of her posts about a husband getting humiliated on the Paris metro, and combine it with her love of daddy/daughter femdomination. This was an obvious candidate for my second series based on Eric Stanton's artwork, so gather round for a Christmassy story of Julie's trip to Paris with her husband, daughter and future son-in-law... 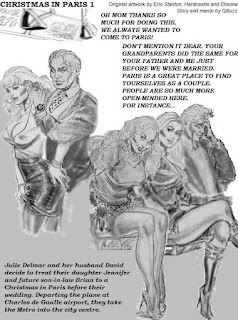 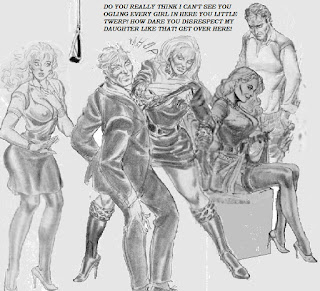 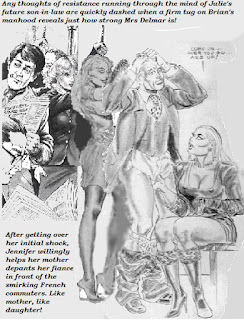 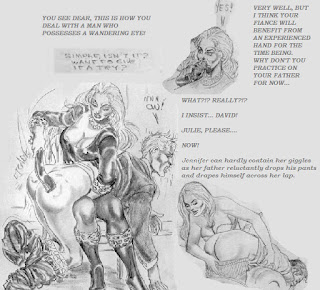 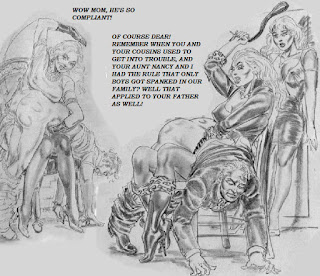 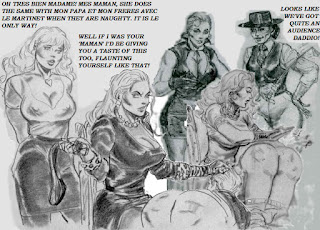 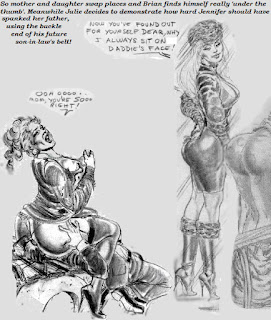 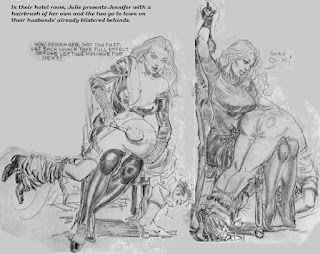 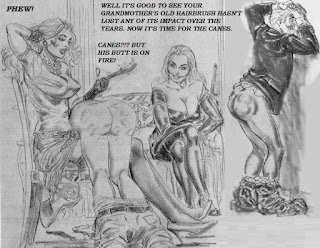 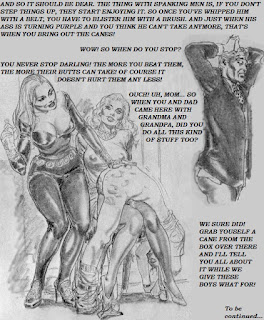 The conclusion will follow in the New Year!
Although Julie has recently started experimenting with her bisexual, submissive side (much to her readers' delight) she would still make an excellent candidate for a femdom matriarch where her whole family is one big Female Led Relationship, just like Lorraine in Stanton's Family series.
Many submissive married men find their wives don't want to spank them hard enough in case they hurt them. Julie's husband doesn't have that problem. She often writes about how she loves to push his limits when she spanks/straps/canes him, and loves to hear him squeal and plead and watch him writhe in agony. No doubt she would enjoy making a naughty nephew suffer similarly if he were sent to her.
Julie certainly isn't embarrassed about her lifestyle, putting her husband through many many public humiliations, so I'm sure she'd happily show her sister how to use a cane when her brother-in-law misbehaves, or show her neighbor how a good dose of sissification can make even the most boisterous boys less... boisterous.
Julie is the proud owner of several strapons that from the sound of it are considerably larger than her husband's dick. Having been penetrated by a strapon cock larger than my own, I can say it is possibly the most submissive thing a male can experience that doesn't involve another man (and from the sounds of it Julie would quite like to try that as well!) Perhaps that would be something else for all the Delmars to try under the mistletoe?


So Julie certainly seems qualified to led her mother, aunts, sisters, nieces, neighbors and friends into a glorious era of matriarch-dominated households. Christmas Day would certainly be interesting in such a society. Merry Whipmas One and All indeed!
Posted by QBuzz at 11:44 6 comments: