September is here and that means school has started again! Remember when you were a fresh-faced firm buttocked 18-year-old and that first September when you didn't have to go back to school but instead left for college or work or some other more grownup pursuit? Well not in my world! Here middle-class 18-year-old boys and girls are packed off to strict finishing schools to learn how to be proper little ladies and gentlemen. And the uniforms, bullying, politics and, of course, discipline are even more severe than at their old schools! 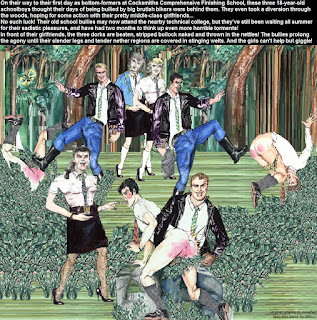 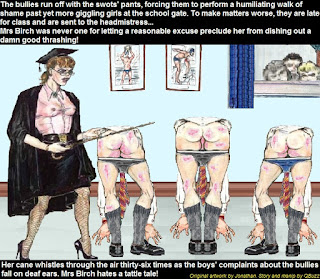 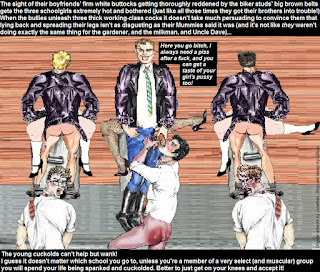 At school it wasn't us clever, quiet middle-class boys who got the girls. Instead they swooned over the rough boys with big muscles, whose hobbies included disrupting lessons and flushing our dorky heads in the toilet. Given a choice between our brains, blazers and briefcases, and their muscles, motorbikes and manliness, it was obvious who our future wives would be spreading their legs for behind the bike sheds.
There are a lot of things in this series that stir some very old feelings for me. The first picture is inspired by a book I read when I was very young where two bullies were searching for a victim and planned to 'roll him in the nettles' - an image that has been burnt onto my psyche ever since as a definitive example of bullying. As I've mentioned before, I was bullied at school by a big powerful meathead and I think this has contributed massively to my masochistic and gay/bi fantasies. Much of what he did was as humiliating as it was painful, made even worse by the presence and outright encouragement of my classmates.
I think there's a sadistic enjoyment for any schoolboy/girl when it comes to watching others getting bullied - though always accompanied by the masochistic thought that it could easily be them with their face in the mud. I certainly got a kick out of watching my bully turn on one of the witnesses or just some random passerby, even though he would inevitably turn his attentions back to me immediately after! I suppose it's equivalent to when you get to watch your prison daddy join in the turning out of some fresh meat, knowing he'll be back to reaming your tight little cornhole when he's done. I was certainly my bully's 'bitch' - he even made me do menial tasks for him - and if he and his brutish friends had taken me down a dark alley after school and made me suck their big working-class cocks I think I definitely would have done it! There might have been tears running down my face but the tightness in my shorts would give me away. And think of the wanks I would have had when I got home!
Just imagine what would happen if we all met up again now...
Posted by QBuzz at 05:19 6 comments: