It's the summer time, and that means bi-curious boys the world over are venturing out into the hot, sweaty weather to enjoy new experiences with hot, sweaty older men. Every boy knows that certain areas such as parks and public toilets are where men go to 'cruise' for casual gay sex. It would be so easy for a teenager to inadvertently stumble into one of the these locations and end up having his first gay experience, especially when he has a wicked uncle there to expose his pert bottom for all those ravenous gay men... 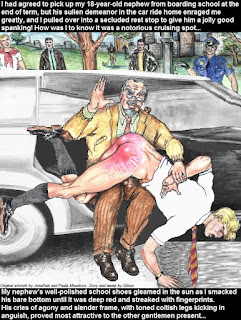 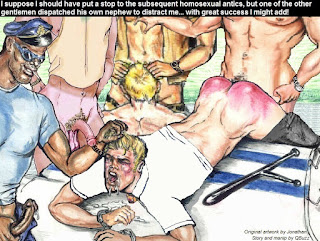 I'm sure the naughty nephew was most comforted by having a police officer present, and I'm sure this particular police officer is well accustomed to using his handcuffs on nervous supposedly-straight boys who are about to get their first taste of cock ;)
Have you ever had a gay experience outdoors? Do you fantasize about being taken roughly against a tree, or perhaps getting your dick sucked by nervous young boys (and then taking them roughly against a tree :D) If so, please share in the comments.
This series was originally called 'Accidental cottaging', which I find to be a more evocative image, but I believe 'cruising' is the more internationally-known term. The inspiration for it came from an incident in my youth when I was in a car with a few friends and one of them insisted on stopping for a bathroom break. As a prank, the driver let him out in a park that was a notorious gay cottaging location. Despite his protests, the boy was so desperate for a piss that he got out - and of course we immediately drove off and pretended to leave him, much to his terror. (Un)fortunately nothing happened to him, but surely it was only luck that hordes of predatory gay men didn't emerge from the shadows, tear his clothes off and fill his teenage mouth and ass with horny, insatiable cock (of course for added humiliation several of his neighbors, teachers and other supposedly respectable patriarchs would be present as well). Us dorky middle-class boys would watch from the car and pretend to be shocked, but I'm sure we'd all return individually to 'accidentally' have our own first gay experiences. In fact, sod it, I wish it had been me getting pranked and then fucked by multiple older men over my buddies' car hood while they laughed at my humiliation...
As a concept, cruising is ripe for this kind of fantasy. Perhaps a married couple decide to visit a dogging site to spice things up with a little exhibitionist action, only to get confused and end up at a notorious cruising spot, so instead of a few dirty old men watching them fuck on the backseat, the wife gets to watch a lot of dirty old men fucking her hubby in the mouth and ass!
Or maybe the story of what happened to the sulky nephew gets around and parents around the country start using it as a threat for their insolent teenagers: 'If you don't wipe that look off your face then we'll take a little drive out to Thickshaft Woods and I'll take my belt to your bare bottom on the hood of the car! And then I'll drive off and leave you, and you know what happens to boys in places like that!' And of course it wouldn't be an effective threat if at least a few of the parents didn't follow through with it!
The fact that cruising sites are places where innocent activities occur during the day means all sorts of misunderstandings could occur. Perhaps a family lingers for too long at a picnic area after dusk and the dad and boys end up sucking cock in front of their giggling mother and sisters. Or maybe a boys' school bus gets a flat on a trip and pulls into a rest stop that is full of gay men looking for action - almost like a delivery service! Of course the driver would probably take the opportunity to fuck the boys too, as would the teachers - or at least those who aren't young and cute enough to be on the receiving end themselves!
Posted by QBuzz at 11:34 4 comments: