After my one-to-one with Danielle last month she suggested I should come to one of the two spanking parties she was throwing in April, to celebrate her birthday. I missed the larger party and went to the much smaller one (two men, with Danielle and Rebecca as spankees) which was much better to ease me in for my first party.
It was great day at Danielle's house with lots of spanking fun and games, interspersed with breaks for food, drink and to allow the ladies to give their sore bottoms a rest. 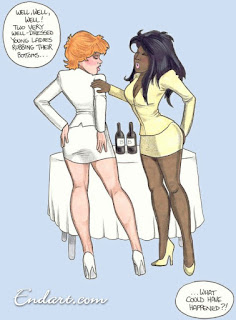 And also to admire the scenes from classic spanking magazines that Danielle had framed and placed on her wall :)
With the ladies in their best party dresses (Danielle's being suitably bratty for they birthday girl) they went over our laps for a warm-up spanking, and I certainly enjoyed getting my hands on two very pert and spankable bottoms in quick succession.
Then it was implements time! Danielle has a huge great pile containing every kind of implement you can imagine.

As always I favoured the more leathery items, like a nice fur-backed paddle that was very enjoyable for swatting Rebecca's behind, and especially Danielle's prized Renfrewshire leather paddle (as Rececca said, the Scots really know their leather). It was also nice to find out that the ladies hated the wooden spoon just as much as I do - Danielle got twenty-odd swats, Rebecca didn't have to take so many as it wasn't her birthday :) 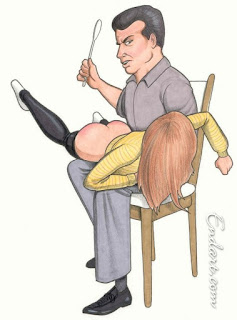 I did try using a hairbrush on Danielle but it wasn't satisfying to use or receive so I soon discarded it.
Then it was first time for the first party game - 'Beat It' - which was a competition between myself and Robert to see who could spank the girls the hardest during the runtime of the Michael Jackson song of the same name. I managed to win thanks to using a double-handed spanking technique I picked up from Sir. 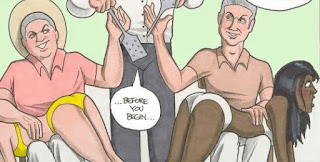 Before lunch we played a game of spanking Twister and had Danielle and Rebecca bent over and spreadeagled alongside and on top of each other while taking several swats with the Betty Page paddle. Check out Danielle's site for some very nice photos: https://stingingtails.co.uk/party-pictures
Danielle laid out an amazing lunch that fuelled us up for our one-to-one sessions. I took Danielle upstairs first and reacquainted myself with her lovely bottom and reacquainted her with my London Tanners slipper paddle - twenty-odd swats for the birthday girl! 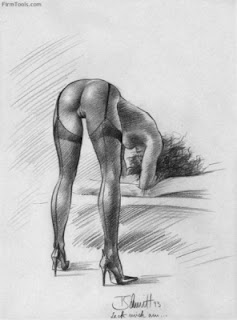 I did oblige her afterwards by rubbing some lotion into her sore bum. She also showed me how to use a riding crop on her, as I had never used one before and was curious.
Then we all went back downstairs and Rebecca was blindfolded and bent over a chair for a game of 'Guess the spanker', as us three swatted her bare bottom and she had to guess who it was. She did quite well but still earnt herself plenty of extra spanks for guessing well, and I put my new knowledge of the riding crop to use on her. 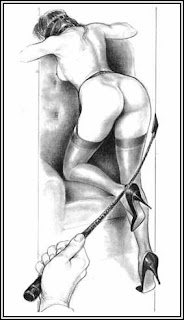 Then it was time for the second one-to-ones. I gave Rebecca a nice long spanking across my lap, then gave her a taste of the London Tanners paddle which she confidently declared she could take 'all day'. I didn't quite go that far as I wanted her back across my lap too, and then I took my belt to her at the end. 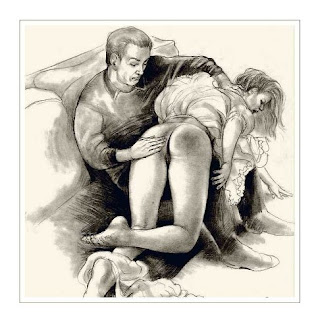 Danielle had demonstrated to us how to use a flogger on Rebecca and I tried that too, but I don't think it's an implement I'll be rushing to use again.

We finished off with a round of Cake Caning and Crying (trademark). After birthday cake, Danielle gave Rebecca six of the best, and then Robert and I gave each of the girls 12 strokes each with our picks of Danielle's cane collection. 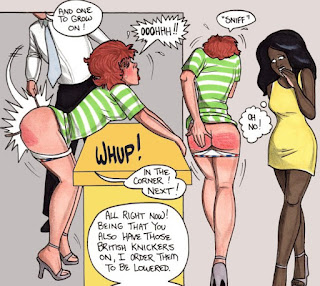 Robert really gave the birthday girl pause for thought with a taste of her Senior Smoked Dragon Cane. 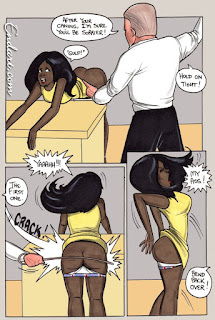 To finish off, Rebecca gave Danielle a final birthday caning. 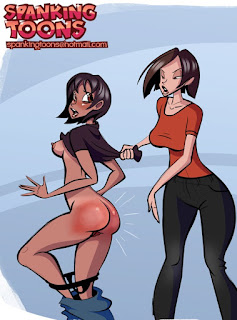 All in all it was a great day with loads of spanking, good food and friendly people. If you've tried out one-to-ones and you're thinking of going to a spanking party then I'd definitely recommend it. And if you don't believe me, just check out the photos: https://stingingtails.co.uk
Posted by QBuzz at 18:27 No comments: