The Headmaster and the Headmistress (A Romance ebook)

In British boarding schools of the early 1960s, the sexual revolution seems very far away. But a headmaster and headmistress are drawn together by their mutual craving for the cane... 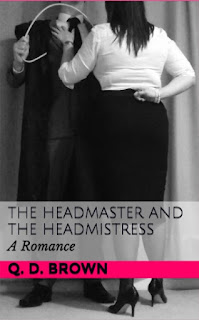 Or read it for free with Kindle Unlimited:
www.amazon.co.uk/dp/B07ZWMPPCM

As you can tell from the subtitle, my latest ebook is more of a 'romance' than pure erotica, but there are still plenty of steamy spanking and sex scenes to keep you and your loved ones warm this Christmas season!
Headmistress Penelope Wraxton is trying to give the pupils of Hazelmere School for Girls a chance at a better life, battling against reactionary pressures, conservative governors and lecherous groundsmen. But this is still the 1960s, and while she is a modern and forward-thinking educator, when one of the Hazelmere girls is caught in a compromising position with a boy from the nearby Carlton College, severe discipline is called for!
While punishing the miscreants, Penelope encounters the Carlton headmaster, Mr George Stanton, who she finds staid, uncompromising... and rather alluring...
The headmaster and headmistress are utterly devoted to their establishments, and both claim to have no time at all for intimacy or romance...
But both have a deep, irresistible urge to re-live the harsh, unyielding discipline of their own schooldays. Can their craving for the cane bring them together? Will they refuse to abandon their insecurities and continue to hide behind their duty? Or can they embrace their desires and give each other what they need... 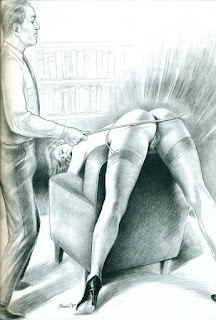 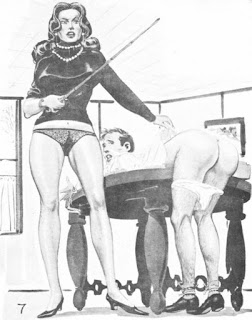 While this is a romance, it is set in British boarding schools of the early 1960s, and so there are plenty of references more similar to scenes from the great British spanking magazines.
When she became headmistress, Penelope received advice from her predecessor similar to that given in The Punishment Book:

'You have four hundred and fifty girls in your charge... I hope you will love them as I have done — but never be afraid to be firm. Just because they are girls, don't think that they should be treated softly. You must drive them on all the time. And if they step out of line, cane them, and cane them hard. The girls expect it, their parents expect it, and the rest of your staff expect it — don't disappoint them!'

The lovely Miss Wraxton is partly inspired by the title character from another classic British spanking story, Miss Johns, a young teacher who is respected by her charges despite (or maybe because of) her insistence on strict discipline.
Well Penelope certainly takes her predecessor's advice to heart! In the opening to the book, when Miss Wraxton is finished dealing with the disobedient senior sixth-former Susan Richards, the poor girl will certainly be spending the next few nights sleeping on her tummy! 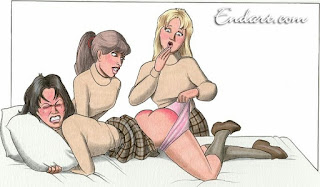 However, the romance between Penelope and George is complicated by the presence of the Carlton school secretary Mrs Perkins, a well-dressed, mature, churchgoing widow who despite outward appearances is rather 'well known' among the men in the area. A former educator herself, she is quite willing to cater for her stern headmaster's hidden taste for a well-smacked bottom... 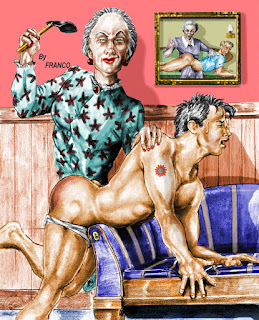 And that's without considering the presence of Keeper, the brutish Hazelmere groundsman. He is all-too-willing to satisfy Penelope's needs, re-enacting the blistering belt whippings she received from her father!

In true cuckolding fashion, George finds the working man's actions with his beloved to be both unbearably humiliating and highly arousing! 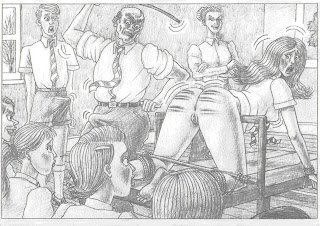 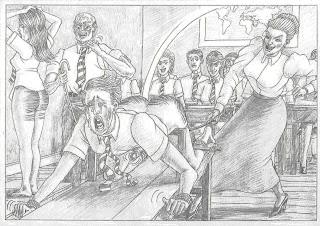