Spring is here and the gardeners are getting itchy fingers. Whereas my hands were itching to do some spanking, so I decided it was time to treat myself to another session with a pro spankee.
It was almost like spanking a celebrity this time as it turned out I lived not far away from Danielle, who has starred in videos for seemingly every site including one of my favourites: Spanked-in-uniform (sister site of Real-life-spankings - which i like so much I based an Endart manip series on one of the spankees).

We met at her house. As I'm still pretty inexperienced with sessions it was just an introductory hour with no roleplay - though Danielle was dressed in a very fetching office-style outfit. 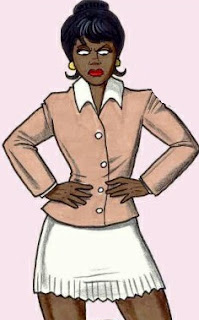 Obviously my hand didn't cause much discomfort to her experienced arse, and she was very friendly. We chatted about everything from nosy neighbours to her time at a girls-only school (plenty of roleplay material there :) ) while I enjoyed smacking her gorgeous bum. Although I did have to get her to remove her stockings, as the suspender belt was spoiling the curve. 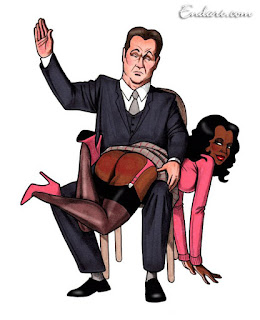 When I could finally tear myself away I tried out a few of her implements. Turns out we have a similar disdain for wood and love for leather! She took her own leather implements without complaint, but I had brought my London Tanners paddle, which lived up to its past reputation by at least making her pause for thought. It also seems to be getting more supple with all these new bottoms to spank!

Danielle then took six of the best with the cane - counting out 'one thank you Sir' after each stroke - and then another six counting out in French. Turns out French isn't Danielle's best subject. She managed to remember her numbers up to 'six merci' but if it had been a dozen of the best I think she might have been in trouble.

I then took my belt to her (another implement that has been visiting a great many bottoms lately) before giving one final hand spanking to round off this very fun session. She then got me to apply some lotion to her cheeks, which was very pleasurable - I'll have to get some for myself!