Spanked and Cuckolded by Your Dad! (Jonathan art manips)

Like all submissive middle-class males, I fantasize regularly about being spanked and humiliated by a strict Mother figure, and my desire to be spanked, dominated, used, abused and cuckolded by Stepdads, Bosses, Uncles, Neighbours, Friends of the Family and other patriarchal father figures is well documented. But wouldn't it be even more taboo to be treated this way by your own Dad?! Just imagine being part of a family where the Alpha Daddy not only still spanks his submissive sons, but cuckolds them as well... 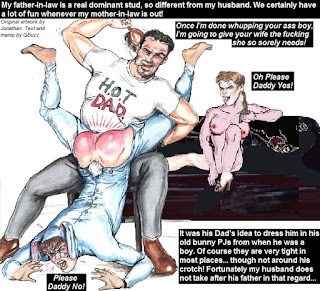 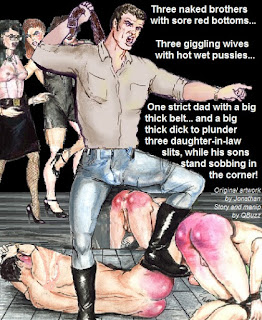 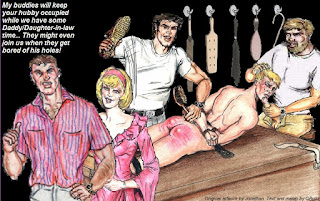 Lately I have been lamenting (almost certainly misguidedly) how I was not brought up in the good old days, or even in the American South or any of the other parts of the world where growing boys still get their bare backsides roasted on a regular basis.
I knew from a very early age that I was interested in corporal punishment, and as soon as I started wanking I was thinking about spanking!
Had I been soundly spanked as a teen then I'm sure deep deep down I would have found it secretly exciting amid the pain. And while being punished by a strict Mummy certainly has its appeals, I have been imagining a lot lately getting stripped naked and put across my big strong Daddy's knee for a SOUND butt-blistering.

I'm sure Daddy would have worked out from my slightly too orgasmic groans that I was enjoying the palm of his hand a little too much, so early on in my teen years we would graduate to a big wooden brush that would really make me howl. Not to mention the frequent obligatory whippings with Daddy's Belt while lying on my bed or bent over the arm of the sofa!

Daddy would of course secretly love whupping my tight teen ass, and delight in turning my butt purple for even the slightest offence.
Despite the unfairness and agony of it all, I'm sure these spankings would be followed by furious wanking sessions just as soon as I was in my room alone!
Though of course Daddy would notice my erection before and maybe after my punishment, and nip things in the bud by forcing me to wank myself to a humiliating orgasm in front of him and any friends or family members who might be spectating... And of course the subsequent spanking would then hurt even more, though I'm sure I would still have enough juice for another wanking session after lights out!

It's not too much of a stretch to imagine this sort of patriarch continuing to enjoy spanking his sons later in life, and cuckolding them too!
Let's face it, fathers who favour spanking tend to be self-made men from blue-collar backgrounds, who would take great satisfaction in blistering the pampered behinds of their spoilt middle-class sons.
It makes a lot of sense that such a figure would be highly attractive to any potential daughters-in-law. After all, many fathers resemble their sons, and many women think men get better with age...
Not to mention, in this day and age, the father is likely to be more of a 'man' than his son will ever be. No doubt he earns more, has a bigger house (and that's if the young couple aren't forced to live with the husband's parents), has a bigger dick... you can see why the wives in my manips are so attracted to their fathers-in-law! 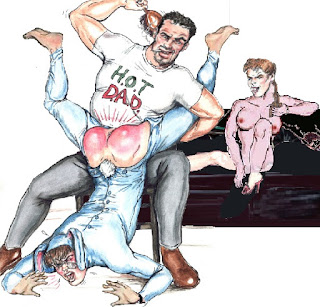 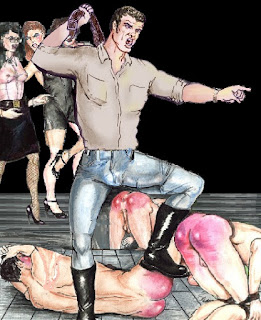 And in this last pic, the wife's lover knows how much she enjoys watching him spank her husband and use him sexually... so he invites two of his bisexual buddies round to help keep hubby occupied and her entertained! 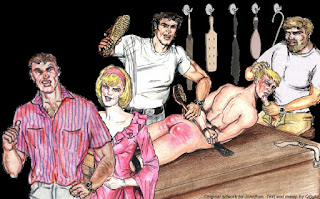