At this time of year, the long university holidays have only just started. Hordes of twenty-something students are dispatched home, and while in the future they may end up being high earners and high achievers, now they have to sweat it out in demeaning jobs to allow them to earn a measly wage and learn the value of real work (or so their parents say). Which means there's plenty of nubile young men and women for lecherous, unscrupulous business owners to take advantage of... 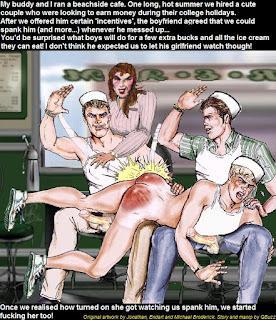 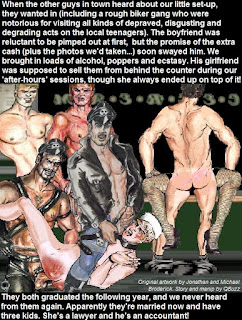 I wanted to add a more 'romantic' twist to the cuckolding in these manips. While it is undoubtedly full-on hardcore bisexual BDSM action, the little twist at the end that the young couple lived 'happily ever after' (sort of) hopefully suggests the girl is a bit less cruel and the boy a bit more willing than in some of my other cuckolding couples.
I imagine the sadistic guys running the cafe would find them unbearably cute, with the girl continuing to lovingly tease the boy even when he is over their laps. There is certainly something about being naked apart from a hat, apron and shoes that makes a guy look submissive! I can just imagine her saying:
'Aww your cute little hat!'
or
'(Giggle) His little willy is so stiff, I think you should spank him harder!'

Perhaps after they graduated, the couple did end up in a full-on cuckolding relationship with lots of bisexuality and humiliation. But just for once I like to think that, as the last line says, they went on to be an (outwardly) 'normal' couple – albeit one with a lot of secrets in their past!

Of course their sex life would remain extremely kinky, and I imagine the wife would rather enjoy teasing her hubby during foreplay about how he used to 'get spanked by those two perverts we worked for' and how those big rough bikers 'choked him with their belts and stuck their big dicks in his cute little tush!' But outwardly they would be a nice suburban couple (except perhaps to a few of their friends who like to meet up for some good old-fashioned suburban swinging and wife-swapping...)

I am also rather taken with the idea of a biker gang who torment the youths of a local town. Rampaging around, snatching teenage couples from lovers lane and having their wicked way with them (both the boys and the girls...).
I suppose it could form the basis of a future manip series... or I could just post some pics relating to it right now! 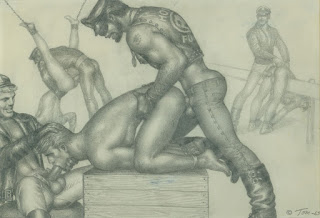 Here are some rather spectacularly dominant bikers having their way with unfortunate local boys. It's a gorgeous composition - I definitely fantasize about being the guy who's tied up and taking two cocks at once! 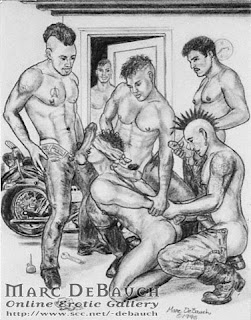 I came across this artwork in my teenage years, and it made quite an impression. I imagine this is a biker gang rolling through quiet suburban towns, and the blindfolded boy is an unfortunate (or fortunate?) local teen who just happened to be in the wrong place at the wrong time (or right place...?) I always imagined he can hear his mother calling him to stop playing with his friends and come in for dinner!

I imagine this blonde girl's boyfriend is tied to a tree and about to have to watch her sucking enthusiastically on that big pierced dick!

But it could be a lot worse, as this boyfriend (and his tongue...) is finding out! 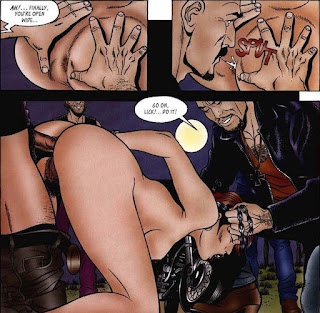 Thanks to the biker gang, this lady's romantic walk in the woods is going to be even more 'romantic' than she ever could have imagined! But where is her fiance... 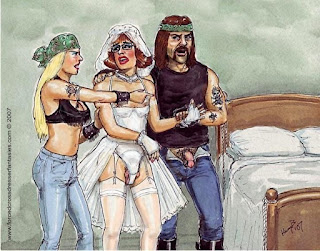 He's been taken as a gift for the cruelest of the bikers, and he's about to experience the deflowering of a bride rather sooner than he expected ;D
Posted by QBuzz at 08:13