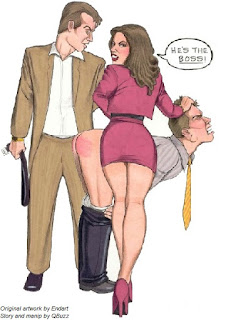 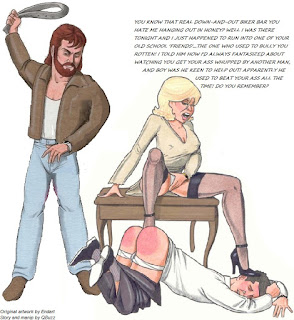 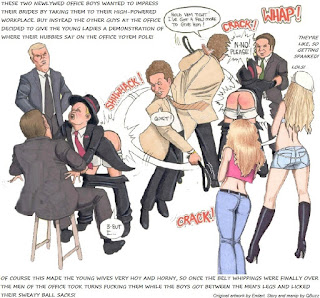 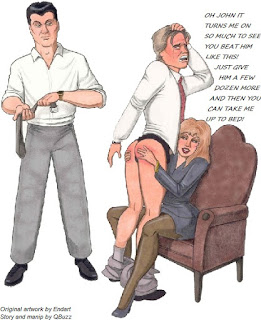 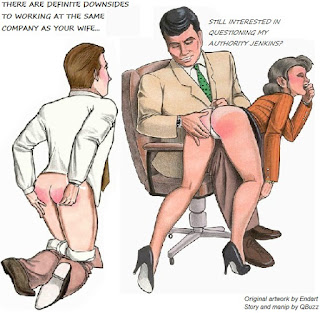 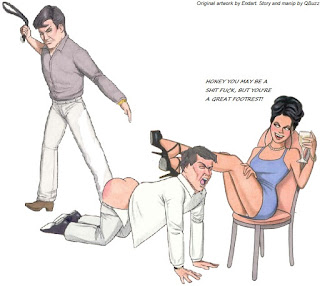 My main reason for creating manips of Jonathan's work (apart from filling the void caused by his retirement) was to make more use of his sexually explicit artworks. He didn't actually create many artworks featuring full gay sex, and as you can imagine I enjoy them very much!
My motivations for creating Endart manips are similar, but it is quite hard to find something new to do due to the sheer volume of work he has done, which covers almost every straight and lesbian spanking scenario. Coupled with the fact that it is even harder to manipulate his artworks to show actual sex, as apart from a few suggestive poses and blowjob scenes he never actually drew people fucking. So hopefully focusing on M/M scenes, which he never produced, will allow this to be the first of many more manip series featuring his work.
You will notice that many of the scenes here are office scenarios. Endart is very good at drawing dominant bosses, and they are just as at home spanking a wimp cuckold as a sexy secretary. In a world where women are expected to go out to work, and to fuck their bosses when they're there, there's no doubt that there's going to be a lot of cuckolded husbands! But is this any worse than your wife being at home, getting nailed by builders, plumbers and delivery men?
Also the idea of being cuckolded by a former bully, whether from school, the neighborhood or a family member, is a huge turn on for me. Most women get turned on by seeing big guys beat up on little guys, but though a cheating wife would no doubt get wet at a re-enactment of her husband's past beatings, even more arousing for the lady (and humiliating for the cuckold) would be to see him spanked like a little boy. Such a display of male dominance would have even the most loyal wife spreading her legs for the victor!
Posted by QBuzz at 06:47 8 comments: