It's the end of August, which means it's Back to School time! And in my fantasy world where adulthood doesn't start until you're 21, that means swarms of hot young 18-year-old boys are nervously squeezing themselves into hot and stiff school uniforms for their first term at finishing school. And that won't be the only hot, stiff thing that gets squeezed into them :D 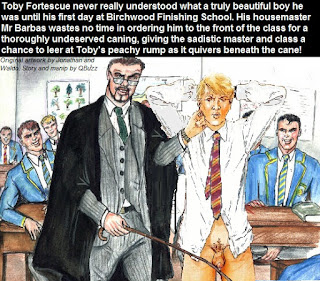 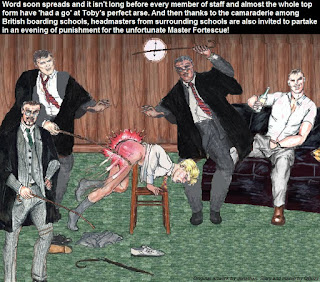 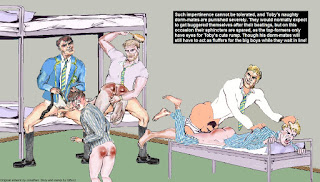 This series was inspired by a rather delicious account of British boarding school life I found, which describes students being 'erotically whipped on the bare buttocks and usually buggered by the older boys and masters'. And a certain John Addington Symonds reports his experience as a boy at public school: 'Every boy of good looks had a female name, and was recognized either as a public prostitute or as some bigger fellow's bitch.' Sounds a lot like prison! I'm not sure if Mr Addington Symonds was a buggerer or a buggeree, but he's right that beautiful boys would certainly be an extra-obvious target for undeserved canings and thick, hard cocks!
But of course almost all 18-year-olds must serve as bottom-formers, and therefore get beaten and buggered alongside those poor beautiful boys. Receiving such treatment at the hands of masters and bigger boys (as well as their stepdads and older male neighbors when they get home) will no doubt drive these horny teenagers to the heights of homosexual desire. So it's very harsh indeed that school rules forbid them from relieving these pent up feelings through romantic relationships with the other bottom-formers. No doubt little brothers and younger cousins bear the brunt of the bullied bottom formers' pent-up horniness and frustration in the holidays. Not to mention next year's bottom formers -- because under the traditional British system, in a year's time these bullied bottom-formers will be promoted to bullying top-formers and get to gleefully inflict all the pain and humiliations they've suffered (and more) on the new intake!
Though if it is the case that some 18 year olds get promoted straight into the top form, such as the biggest, most skilled sports jocks (don't they always have it easier in life) then surely there won't be space for all the bottom-formers to be promoted? But that's another story...
Posted by QBuzz at 14:56 4 comments: