It's time to return to Paris with Julie Delmar from Strict Julie Spanks, where having schooled her daughter in the art of bringing her man to heel, it's time for Julie to reveal why she is the way she is... 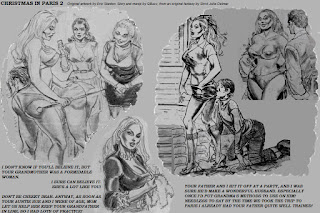 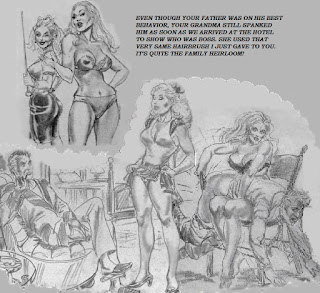 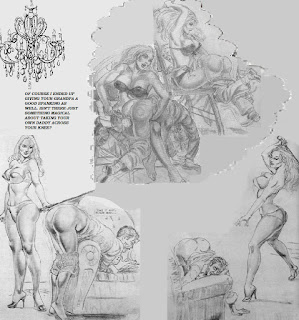 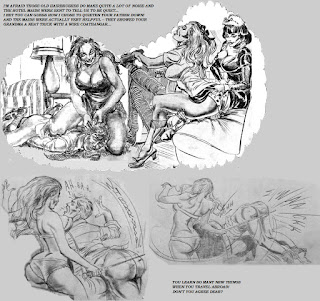 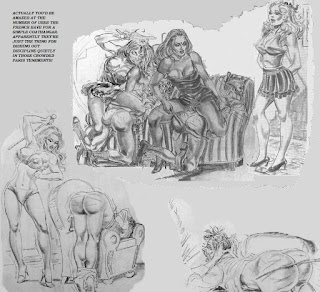 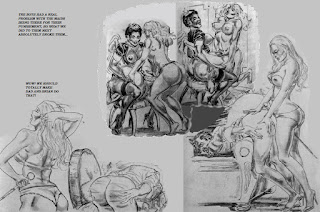 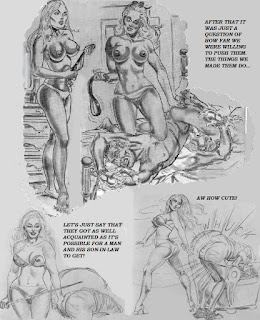 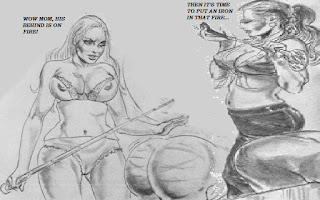 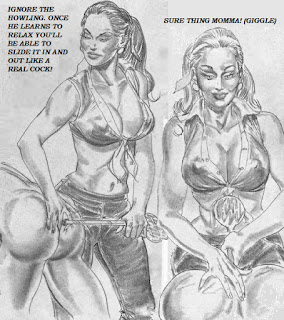 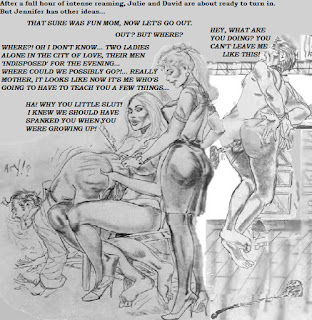 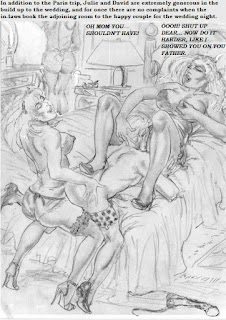 I'm not normally a fan of role-reversed intergenerational where younger dommes punish their elders - I just find the idea of a secretary spanking her boss to be weird, likewise a college-age guy spanking his stepmother. I prefer the traditional scenes where the elders take charge, and the youngsters have to respect them, or else! However I have to say that matriarchal femdom scenes are the exception to this rule - perhaps it's because Eric Stanton's Family series had left such an indelible impression on my psyche, but I find the idea of the younger women in a family dominating their elder male relatives as well as their husbands and brothers to be hot hot hot!
It's amazing how easily the ladies in Julie's world fit into the templates created by Stanton in his Family stories. I'm sure Julie and her mother would find they had a lot in common with Lorraine when it came to having their husbands howling in pain, and Jennifer and Dolly would be ultra-competitive in how hard each of them could punish Teddy, Brian and all the other men in their lives! Perhaps Julie should open a sex shop in Canada just like Lorraine's!
A matriarchal femdom family would just be the best. You'd have the oldest matriarch, 'Grandma', who would rule the family and spend her extensive free time in retirement sticking her nose into her relatives' businesses and wielding her dreaded hairbrush wherever she felt it was needed. The males in the family would go weak at the knees simply at the sound of her voice! Then beneath her in the hierarchy would come her daughters and daughters-in-law, who as well as subjecting their husbands to regular punishment spankings would also keep things red hot in the bedroom to...well...keep things red hot in the bedroom. Then on the next level, the young granddaughters would just be starting to explore the sexuality of spanking with their submissive boyfriends and new husbands. And of course there would be plenty of aunts and great-aunts specialising in various forms of humiliating punishment, who naughty boys could be sent to when they need a change of scene and spanker!
Family gatherings such as holidays and weddings would be the ideal place for the older matriarchs to pass on their femdom knowledge to their daughters and nieces, from handing down the family hairbrush to advising on the proper way to use a cane. Every female in the family would be intimately acquainted with every male bottom in the family and how to subject them to agonisingly blistering punishment!
Posted by QBuzz at 02:45 9 comments: