My two biggest gay fantasies are to be be spanked and made to take cock while dressed in traditional British school uniform; and to be thrown in jail to be used and abused by the inmates and guards. I've never been able to have both at the same time... until now: 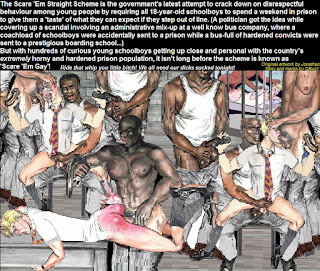 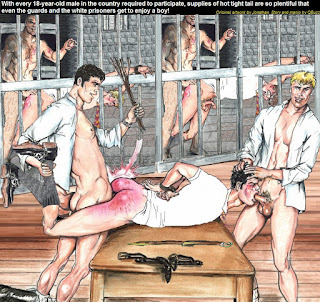 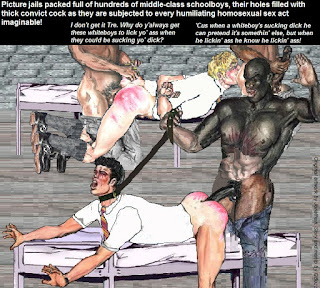 Of course there's a reason school uniforms and prison scenarios are rarely seen together. Even in my twisted fantasy world this series requires a lot of suspension of disbelief. Parents would not allow this to happen!
Or would they? I've been fascinated by spanking since I was a young boy and one of my pre-internet outlets for this was a book I regularly checked out of the school library that described historical corporal punishment in great detail. One story that sticks out was a medieval mother who learns that her son isn't doing well in his studies and orders his tutor to 'truly belash him until he will amend'! Perhaps today an exasperated pushy parent like this might see a black cock up the ass as a final cure for all those irritating teenage behaviors that endless spankings just won't solve!
Or perhaps the parents are like the cheating mothers in classic British spanking magazines who claim obliviousness to the goings on and are all too happy to get a free weekend to spend with their lovers, even if it means sending their daughters to get spanked by lecherous old men or their sons to get buggered in prison!
Or maybe the parent is a sadistic stepdad who knows full well what is going to happen and even delivers the classic line 'you know what happens to cute whiteboys like you in prison' as his terrified stepson is carted off to jail...
You probably think it's extremely unfair to jail innocent schoolboys overnight with seasoned criminals. However, it should be remembered that the rate of bisexual curiosity among young males is close to 100%, particularly in the middle classes, and prison can be a great place for them to explore these feelings with experienced older men, particularly if they were too shy to experiment at boarding school (though given the goings-on at British boarding schools, that's not too likely...)
And you probably understand why the boys are getting their mouths and asses pounded (we all knows what goes on in prison after all), but why are they getting spanked? Well, as my uncle always used to say, spanking isa great prelude to anal sex! And experienced convicts would know just how to get those tight teenage tails ready for a good reaming!
The same goes for why all the boys in the last pic are blonde (most convicts are black after all, and would no doubt prefer beautiful blonde boys for extra imprisonment) and why the boys keep their school uniforms on - everyone know school uniforms are sexy, and it would make the classic prison 'rubber-gloved finger up the ass' strip search a lot more efficient, as the boys would only need to remove their shorts and underpants. Just image how sweaty and cum-stained those school shirts and ties will be after a weekend in the cells!
Oh and by the way, I modelled one of the 'couples' in the second manip on myself and one of the big, burly school bullies who used to humiliate me daily and who now regularly appears in my dirtiest fantasies. Can you guess which it is?
Posted by QBuzz at 11:00 4 comments: