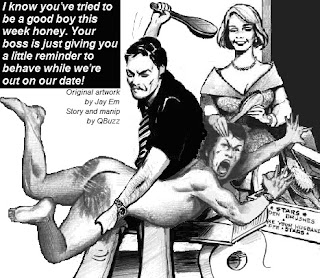 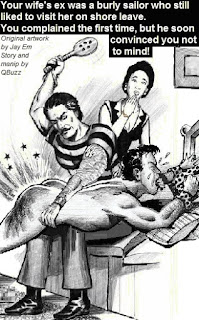 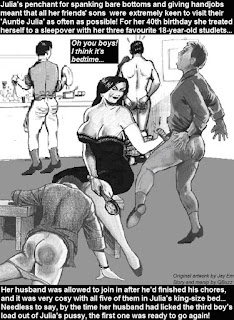 Jay Em's drawings contain such furious energy and his stern characters deliver such blistering spankings that some people have complained that his work can seem a little 'over the top'. Well that isn't a concern when cuckolds are getting spanked... the cheating wives are sure to get a kick from seeing their subby hubbies get their sissy bottoms well and truly scorched and their poor little faces contorted in anguish!

In the third manip, I thought Jay Em's work would be perfect for showing a wife who dominates her  lovers as well as her cuckold husband. I love the idea of a voluptuous domme with a 'harem' of submissive studs who she spanks just as hard as her husband when they displease her! (I'm thinking of Inga from Eric Stanton's story 'Friends of the Family' for starters...)
Not that burly bulls aren't good too of course! I do like the idea of a manly sailor who's 'women in every port' aren't necessarily single! Imagine the dread of hearing your wife's phone jingle and then her gleefully announcing that 'Oooh John's ship is putting into port tomorrow. Better get ready for a fun weekend hubby!'

I wonder who would be the cruelest to be cuckolded by...
Your wife's boss and/or co-workers, so that you can only imagine what's happening to her when she's at work or at one of her many staff parties or conferences?
Your boss and/or co-workers, who you still need to go into work and take orders from even though they were spanking you and fucking your wife (and maybe you as well) the night before?
Or perhaps a family member (brother, father, uncle, cousin...) or family friend, who probably bullied you mercilessly growing up and so know just how to humiliate you to get your wife nice and hot!
And then of course there's the working men: plumbers, handymen, milkmen, removal men... You probably think that as a middle-class male, you should be above them on the totem pole. But you know - from the way they throw you around with their big manly strength, and make your wife squeal while you stand in the corner with your hands on your head - that you really aren't!

What are your favourite 'fantasy figures' when it comes to cuckolding? Please let me know in the comments and maybe they will inspire my future manips...
Posted by QBuzz at 08:42 24 comments: