In case you're wondering how the unfortunate pilot and co-pilot are supposed to activate their parachutes, I envisaged that their pullcords would have been tied around each other's ballsacks, giving them a (painful) tug once the first man has fallen sufficiently far...
No doubt it would be a rather chilly descent! 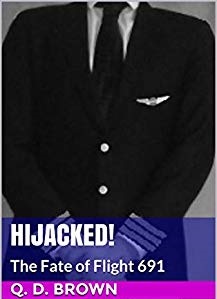 Or read it for free with Kindle Unlimited:
www.amazon.co.uk/dp/B07RC77XKQ

It's worth mentioning that my original intention was for the aircrew to be thrown out of the plane completely naked. After some consideration I decided that outcome would be too dark for this blog, so I chickened out and added the parachute. But in my original fantasy (and certainly in the ebook) I was a young airman, stripped of my smart uniform and tied up by the cruel hijackers, spanked and made to service them before being booted screaming out of the open hatch to my doom!
Which version do you prefer...?

At the beginning of the story, the three aircrew of Cargo Flight 691 from London to New York are expecting a routine trip across the Atlantic. The pilot and co-pilot sit relaxed in their smart uniforms, chatting about the co-pilot’s plan to propose to his girlfriend on their return home. Behind them the fresh-faced pilot trainee hangs on their every word and movement, nervous but also extremely excited at the prospect of finally participating in his first proper flight after months of training.
Unbeknownst to the air crew, there are some extra pieces of cargo aboard – in the form of three masked stowaways! The hijackers strip the crew of their uniforms (or maybe just their shirts, jackets and trousers; leaving them naked apart from their hats, shoes, socks and ties…) and tie them up.
I originally thought that maybe the hijackers spanked the airmen to get them to reveal some code or something to help them control the plane. But it’s probably a lot hotter that they spanked them just because they can! 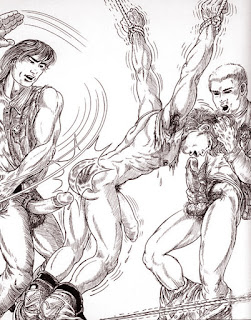 And no doubt these rough criminal types will get a real kick out of getting their dicks sucked by their helpless, well-spoken British captives, and sticking their swarthy cocks in their tight, middle-class asses! 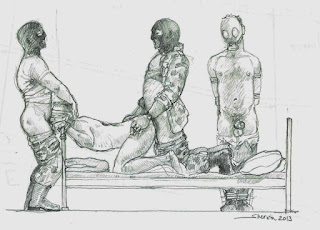 Once the hijackers have had their fun, the pilot and co-pilot are swiftly removed from the situation with a firm kick to their blazing-red fannies! The young trainee is kept aboard for the moment, as the hijackers want to have some more fun with him – before he is similarly disposed of. At least his first-ever flight will get to go on for a little bit longer!

An even crueller twist is that the aircraft was only hijacked as part of an elaborate insurance scam, and so the innocent aircrew have been sacrificed by their employers for the sake of a few extra percentage points on the annual balance sheet! At the head office of Benton Airways, the CEO enjoys a blowjob from an intern in his fifth month of unpaid work experience when he gets the call saying that Flight 691 had disappeared en route to New York. Puffing on his cigar, the boss muses on the efficiency of the shady character who had phoned him up the week before, suggesting that they skimp on security for one of their cargo flights. The criminal syndicate will get a fully functioning plane and its cargo, while the insurance payout will make a nice contribution to the annual profit sheet and ensure the CEO and his colleagues on the board got their bonuses. It has been a difficult year after all! It was perhaps unfortunate that a young trainee was on board the flight along with two other expendable employees... but sometimes these things can't be helped!

Thousands of miles away (and thousands of feet up) the hijackers finally finish with the young trainee pilot. With his bottom glowing from the hours of belt spankings and the taste of cock and cum still overpowering in his mouth, he is dragged begging and pleading to the hatch where his colleagues had departed the flight hours before. His desperate pleas only added to the excitement of the merciless hijackers, and they even mock him about their hot spunk dribbling out of his sore, well-fucked asshole as they boot him screaming into the sky for his maiden flight!
Posted by QBuzz at 05:55