It happens every Christmas. Middle-class English youths return home from their first term at finishing school to find that their mother has found a new man, their father has been thrown out and there is a new daddy of the house who is all-too-eager to enforce his own unique brand of discipline... 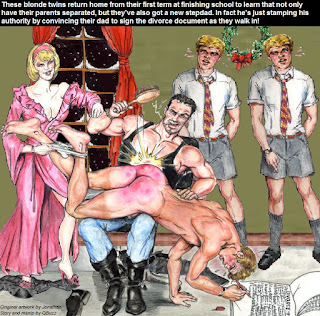 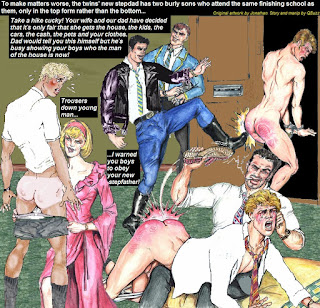 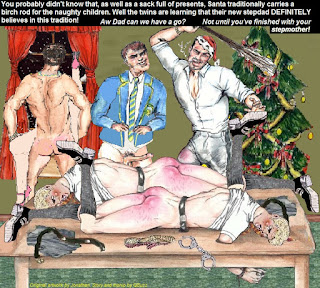 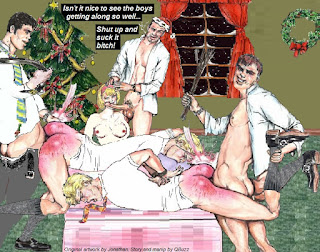 And as if things couldn't get any worse than having a brand new stepdad who takes great delight in blistering your bare butts much much harder than your real Dad did (if he did at all - imagine having a stepdad who spanks after having a dad who didn't!), you also have new stepbrothers to deal with. And of course they're bigger and stronger than you and they like beating your asses as much as their dad does. And because you all have to share a room (and maybe even a bed) you're inevitably going to end up sucking their superior cocks and taking them hard in the ass.
Having tired of her steady but boring (inside the bedroom and out) husband, the boys' mother no doubt took sadistic glee in her former man's humiliation and was just a little too happy to support her lover's new disciplinary regime by taking her boys' pants down for their spankings, and maybe even using her own hairbrush on their bare bottoms to really emphasise that this is now a home that very much believes in spanking! She'll no doubt be getting fucked rough and hard by her new man morning noon and night, and as if that isn't enough she now also has two hard and horny stepsons in her house who will be regularly treating her to vigorous pumpings with their virile young cocks. When they aren't burying them in their stepbrothers' hot tight asses that is!
But before you wring your hands and say 'Oh those poor boys, and on Christmas too!', remember that deep down nothing makes middle-class English boys happier than regular doses of pain and humiliation. We may scream and holler as the leather/rattan/birch scorches untold agonies into our crimson-red behinds. We may whimper as we're made to suck on thick working-class cocks. And we will almost certainly squeal the house down when our tight little sphincters are repeatedly and roughly penetrated, and moan like whores as our rectums are pumped full of working-class cum. But you can tell - by the way we tilt our asses back up towards the cane or cock, and by the way (and despite us being forbidden to touch ourselves) our slender cocks shoot reams of cum as we orgasm intensely from having our prostates pounded - that this is what we really want.
So with that in mind, these two twins are almost certainly about to have their best Christmas ever!
Posted by QBuzz at 06:54