Nothing makes a boy cry harder than a good hard spanking (well, maybe one thing), and everybody (especially strict English Mummies and Nannies) knows that crybabies need pacifiers! So while 'adult baby' scenes really aren't my thing, the idea of a boy having something hard in his mouth to stop him crying is certainly appealing. Though for big boys, instead of a dinky little pacifier/dummy, it should really be something bigger... 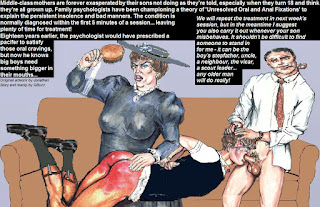 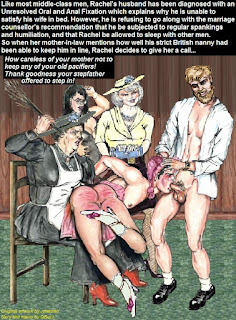 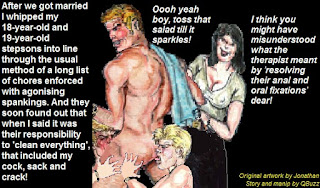 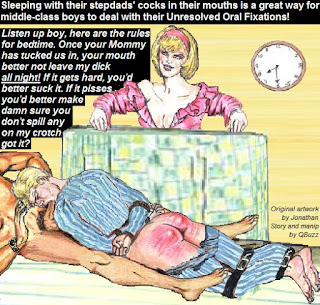 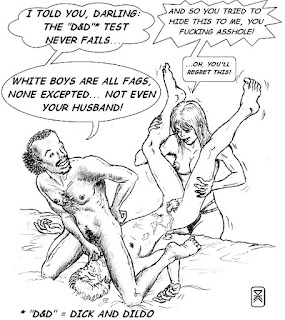 Imagine how the boy feels, the humiliation of getting told it's all for his own good as his previously loving mother roasts his bare bottom with her hairbrush, his face pressed into the therapist's crotch so he can feel (and smell) the older man's stiffening cock in those tight tweed trousers. Once the hairbrushing has made the boy suitably subservient those tweed trousers will be unzipped and the therapist's erect cock will be slipped into the boy's sobbing mouth. With his hands pinned behind his back, the very act of holding an older man's cock in his mouth while being spanked will be a deeply submissive act that would awaken the boy's most-repressed homosexual desires. The preponderance of Unresolved Oral/Anal Fixations would no doubt lead to development of the Cuckold School of Counselling, and to boys' old nannies been called up to assist in resolving their conditions.
British nannies have got a reputation of being sweet and kind, but in real life they're nothing like Mary Poppins. More like Mary Cockins ( ' SPANK when your father tells you to SPANK put your money in the bank SPANK you bloody well do it!' :D ) They are known as traditional British nannies because all middle-class British males have one. And British nannies don't need any Oral/Anal Fixation Psychology nonsense as an excuse, they just know that bad boys need their bums smacked hard by nanny! We all got our bottoms roasted with Nanny's hard wooden hairbrush, and our temperatures taken with her thick rectal thermometer, and our balls and asscracks scrubbed with her thick-bristled bathbrush, and made to bow and curtsy and wear our sisters' clothes for humility, and made to suck cock at the earliest opportunity (Nanny considered it good practice for our time at boarding school, and for our future as cuckolds and white-collar wage slaves).
And of course the boys' stepdads would gleefully accept the diagnosis and start treating their stepsons with their big manly cocks! The final manip in this series is inspired by this scene from one of my favourite comics: 'Black Master, White Slaves' by Desod, which tells the story of what whiteboys have to do for their black cellmates in prison... 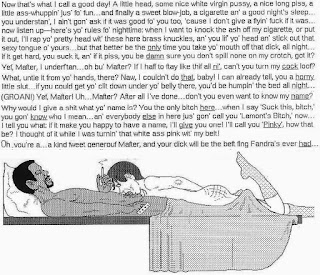 Ever since I saw this panel I've fantasized about having to spend a night in this position, bound beneath the covers with my lips around the cock of a bigger, more dominant man. Just imagine it... how hot and sweaty and uncomfortable it would be, the overpowering stench of his hairy crotch with my nose pressed right into it, me whimpering in the dark and entirely focused on his chunky cock alternating between erectness and (still sizable) flaccidness throughout the night, his satisfied sighs as he releases his rancid piss down my throat, or his sleepy grunts of pleasure as he cums in my mouth yet again...
Posted by QBuzz at 11:59