The only thing harder than prison life for a middle-class whiteboy is the big erect cocks that will be sliding in and out of his ass and mouth on an hourly basis! And that's practically vanilla when it comes to hot gay prison sex!
As a great artist once said 'All whiteboys are fags - none excepted'! So maybe prisons are really just places where stuck-up suburban whiteboys get their deepest fantasies intimately explored by big black men. But before you get to the intimacy of the cells with their thin sheets and well-bitten pillows, you've got to get past the guards.
The only qualification needed to become a prison guard is to be a bullying jock. Who knows, maybe the same guy who beat on you for your lunch money is the same guy who's popping your anal cherry with his fingers during your unnecessarily intimate entrance inspection. And then, after you've been given a good flogging, properly popping it with his big cock!

Once the guards are finished with you, you'll be handed over to your cellmate(s). You won't be needing your prison jumpsuit, as the sex-starved convicts in your block will want to feast their eyes on your skinny runt of a body, especially your soft pink mouth and tight little buns! They'll no doubt give you a new name - perhaps 'Ruby' in tribute to the color they like to turn your ass with their belts? And if your new prison daddy doesn't think enough of you to christen you anything more than 'Bitch' or 'Whitey' then you know you're in for an even rougher time than average! But no matter what your name, there's certain things that always happen to a whiteboy in prison: 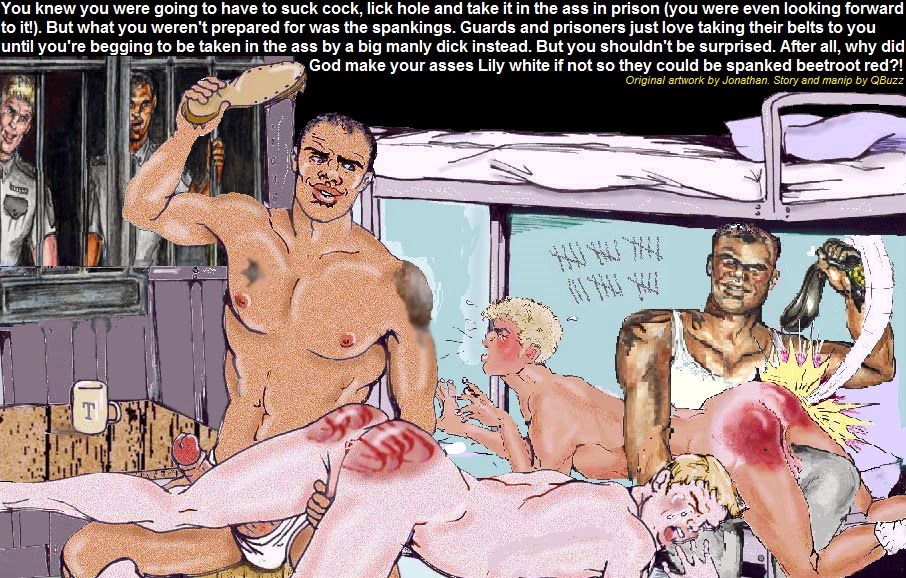 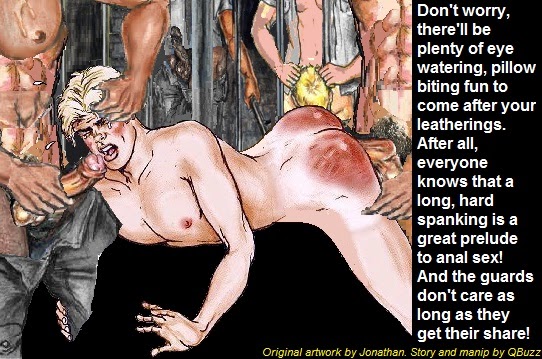 It's a sad fact of our society that there aren't enough middle-class whiteboys to go round in prison. Convicts have several ways of dealing with this. Whiteboys in a three-man cell will find that 2 does go into 1 after all! And then there's Ride-the-whip Nights... 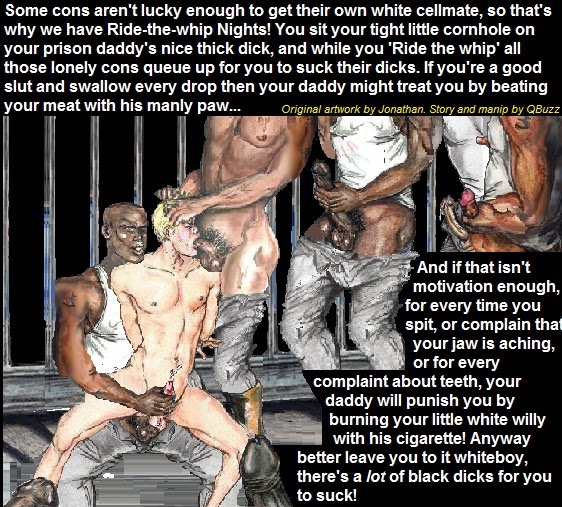 I've only recently come across this concept, but I have to say I love it! Imagine the feel of a big meaty mancock in your tight butthole all night, while you taste all different flavors of cocks. You'd learn if black cocks tasted different to Latino cocks, and whether a cut cock is better or if a foreskin helps 'hold in the flavor' :)
Prison showers are legendary. Like many middle-class whiteboys before me, my first exposure to gay sex was the idea that I could be bent over helpless in the prison showers while some rugged convict took me roughly from behind. But there doesn't seem to be much artwork featuring this classic scenario, so I hope this manip adds to the balance: 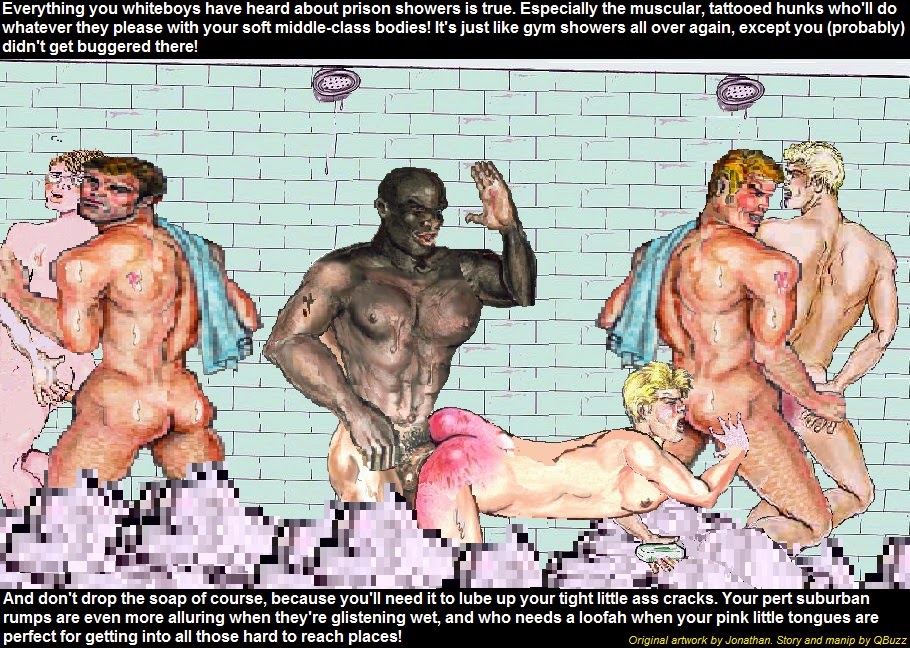 Of course a soft whiteboy mouth is often put to work on a nice thick cock during his assfuckings, but he might also get to try another classic prison sex scenario - 'tossing the salad', i.e. using your well-trained tongue to pleasure a bigger man's sweaty, smelly asshole. I love the idea as it's just so naughty and submissive, and it seems to fit right in with shower scenarios.
Posted by QBuzz at 09:39