With Christmas looming, I was once again summoned to Sir's chambers for my end of term punishment.
I had bought myself a brand new dressy strap watch to replace the one that didn't survive our last session, and Sir instructed me to pack school uniform and pyjamas. I was also told to record my use of foul language throughout the week, and to wear white socks instead of grey in order to violate the school uniform code and give a pretext for punishment.

I turned up on time and this time we went straight into the roleplay. Sir dislikes shorts for sixth formers, so I was able to travel to his house in basically my school uniform with a sleeveless sweater over the top (which is a submissive look I love anyway!)
I was immediately scolded for breaking uniform code and not telling him I was on my way, and put across his knee for a good spanking. 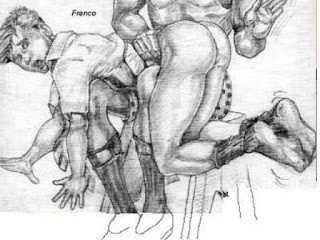 He started on my trousers, then my white underpants, then my bare bottom. I got to keep my shoes on this time, which I enjoyed as I love wearing shoes and socks while being bare bottomed.

I was erect throughout and Sir continually scolded me for it. This didn't seem to help it go down any! Sir reads my blog (to check for spelling and grammatical errors of course) and had decided I'd been too boastful about him hanging a cane off my cock last time, so this time he hung his size 12 plimsoll off it! When he told me he had found it in a bin my reaction earned me extra punishment. He also rubbed my cock between two plimsolls, which was rather thrilling, as I always enjoy getting stimulated by implements.

Then it was time for me to be punished for foul language. I suppose I do have a mouth like a toilet - maybe that's why my wife likes to wash it out with piss... 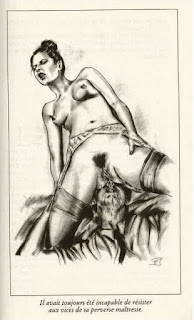 I had lost count at 50 curse words for the week, which earned me a sound slippering. I'm really starting to love Sir's slipper as an implement! 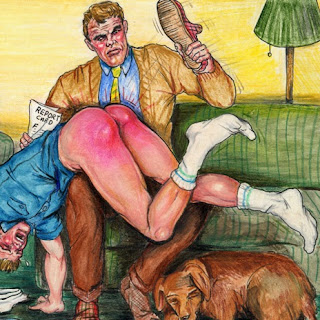 Then I was sent to the corner with hands on head so Sir could take pictures and examine my bottom to see if he had achieved his aim, as outlined in an email earlier in the week:

You will end up colour-coded thus; Red cheeks through embarrassment, White shirt tail lifted up, Red cheeks after a thrashing, White socks in which you will stand outside the dormitory door hands in head., reflecting that they were the cause of your discomfort.

And I hadn't even had my caning for wearing white socks yet! I was sent up to the bedroom to sit on the bed and listen while Sir showed me his collection of canes and told me about his friend who worked in a borstal and liked to cane boys with their heads under the desk so they jumped up and hit their head after each stroke. 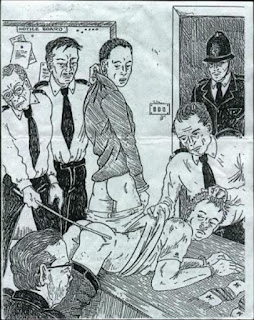 I was intimately acquainted with one cane as it was hung off my cock again while I was scolded and then Sir made me bend over and clench it between my butt cheeks, which made for some nice pictures! 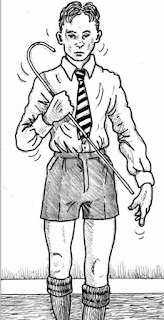 Then I got even more intimately acquainted with it as Sir gave me two sets of six. The first were a warm up but the second really burned and got me jumping and yelping as I tried to count them out. The sensation in my bottom when I lay on the bed afterwards was great though. 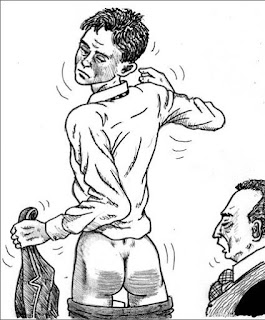 After this I changed into my pyjamas (though the bottoms didn't stay on for long!) and was put across Sir's knee (dick trapped between thighs) for a taste of his three-tailed tawse. I love leather implements and although it stung a lot at first once we got into a rhythm I was in spankee heaven. 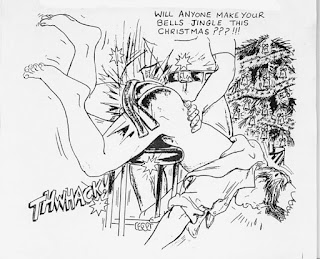 I've written before about how Santa is quite a dominant figure (comes into your house late at night, wears a big leather belt...) and as we are both big fans of Jonathan - who does a great Santa drawing - Sir put on a Santa hat and put me back across his knee for a final naughty-boy spanking. 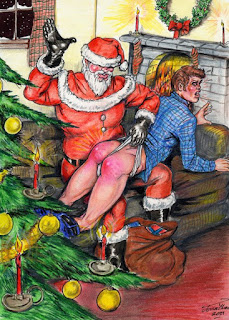 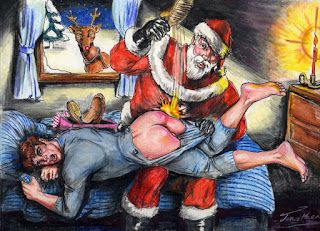 After this the session was over and we came out of our roles and discussed plans for future sessions. So hopefully I'll have lots more to write about in the new year!
Posted by QBuzz at 09:24