Betty's Diary 4.1 My Most Wonderful Retreat

Dear Diary,
Betty here again. When I stopped writing the last time, the bus had just left the rest area after we'd spanked all the husbands. Our four moms, backed up by the dads, insisted that we six wives give our husbands dicks a rest. So we did, but that didn't keep us from staring, the sight of six naked slave husbands being much more interesting than anything out the window!
After another thirty-five minutes or so, we pulled off the highway onto a gravel road. Driving a short distance around two bends, we arrived at the retreat, my most wonderful retreat. It was the start of the greatest, most fantastic weekend any of us six wives had ever had. And the most horrible our six husbands had ever had. Let me tell you all the glorious details.
"All off," announced our driver, Mr. Melick. He's the father of my friend Marcie, who's 26 like me. Marcie's entire family was on this trip. Her mother, her 27-year-old sister-in-law Susie, and big brother Ray, 29. Of all the husbands, Ray had by far the biggest prick and balls.
"Each girl grab a boy's dick," instructed my mom who, along with my dad ,was on the bus. As, of course, was my brat husband Teddy and my 24-year-old little brother with the little dickie, Little Dickie.
Kathy's mom made the assignments, girl to boy. Kathy, also 26, was my other friend on this adventure, accompanied by her mom and dad, and sister-in-law Nancy, 24. Both their husbands
were among our victims, Charlie, 28 with the smallest dick in the group, and 25-year-old Justin, whose weiner wasn't much bigger than his brother-in-law's.
"Okay, everyone, let's go," Said Marcie's Aunt Jenny. She was the fourth mom of the group. She was aboard with her 23-year-old daughter Rachel and 26-year-old son-in-law, Kenny. Kenny, like the other husbands, was, of course, naked. His no longer so private privates were bigger than the little boy ones of Dickie, Justin, Teddy and Charlie, but nowhere near comparable with Ray's proper man-cock.
We marched off the bus. To my delight, I got to lead Ray by his dick, followed by the others. Marcie with Charlie, Kathy with Teddy, then Nancy and Kenny, followed by Rachel and Justin, with Susie and Dickie bringing up the rear.
We were outside a large house. Marcie's mom unlocked the door. We entered into a very large living room. Two huge sofas seating five people each and a smaller one for three lined two of the walls. Against another wall were nine hard wood chairs, each with a large diameter screw hole in the center of the seat. Each husband had his name taped to one of the chairs, leaving three unassigned chairs.
A coffee table was in front of each sofa. My attention was immediately caught by the array of goodies on the table and hanging on the walls. Not the snacking kind, but the smacking kind. Paddles, hairbrushes, straps, tawses, whips, several cat-of-nines, even a selection of canes and birches. I didn't even know that they still made canes, now that British schools aren't allowed to use them! 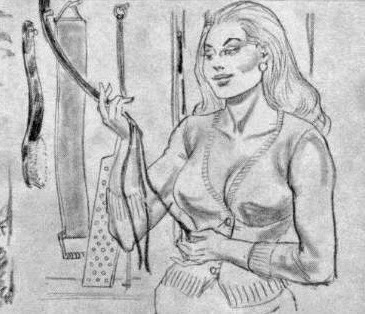 Also on the table were various containers of lubricants and ointments, and even lemon juice. As well as a collection of hand cuffs. I knew right then that this was going to be one fun weekend for us girls, and one hell of a weekend for the boys. And, boy, was I ever right!
"Okay, first things first," announced Mrs. Melick. "Let's get everyone settled into their rooms." Each set of parents had a double room each upstairs, which still left plenty of empty bedrooms. Despite this, us girls had a downstairs room to ourselves, with an adjacent bathroom. This room was set up with nine very comfortable cots, three more than we needed.
Our husbands also had their own room, next to our's, with the hallway door removed. Unlike us, they only had nine thin mattresses on the floor, each covered by a bottom sheet, but without top sheets or blankets. Their large doorless bathroom was off the hall; this had three sinks, three toilets, and three shower stalls with clear see through curtains. They certainly weren't going to have any privacy this weekend!
Once we were all settled in, we gathered back in the living room. Our husbands on their hard chairs, the rest of us on the nice soft sofas.
"Each of you girls is in charge of whatever boy you brought in from the bus," started my mom. Boy was I happy to hear that! "You are responsible to make sure that at all times your boy follows the house rules."
"What are those?" asked Susie.
"First," Marcie's mom took over, "except when in bed, each boy is to have a boner at all times, unless one of us mothers say otherwise."
"And except for five minutes after cumming," my mom modified.
"Which brings us to rule two," continued Mrs. Melick. "You control when the boys can cum, any cumming without permission, or not cumming when ordered by you, means punishment for that boy."
"Now for rule three," said Kathy's mom, "the boys are to have red bottoms at all times from fifteen minutes after getting up in the morning till they get in bed at night."
"How they get that way," said my ever helpful mother, "is up to you. But red means red, not white, not pink, not polka dot." We all laughed at that.
"What about purple?" asked Rachel.
"And black and blue?" asked Kathy. "Mom was always threatening to turn Justin's butt black and blue."
"Well," her mother answered for the parents, "don't on purpose try for any of those colors, but if they happen, they happen."
I noticed that all the husbands were squirming on their hard chairs.
"I would suggest," said Marcie's mom, "that as much as possible you girls work as a team in enforcing the rules."
"Which," said my mom, "it's time to start doing, beginning with the red bottoms."
With that, we wives set to work in our roles as enforcers of the rules. We each had our boy get over our laps. I used a nice hairbrush on Ray, as did Susie on Dickie. 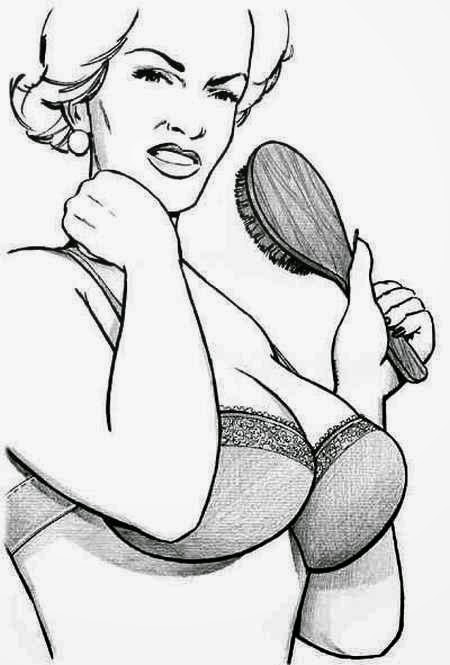 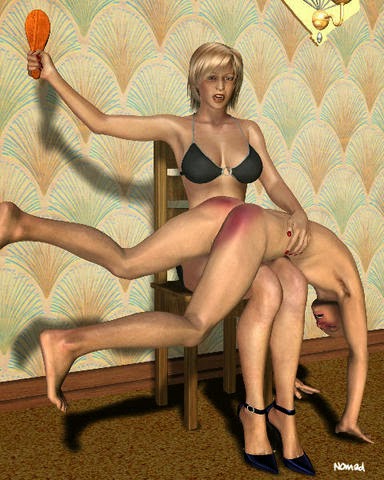 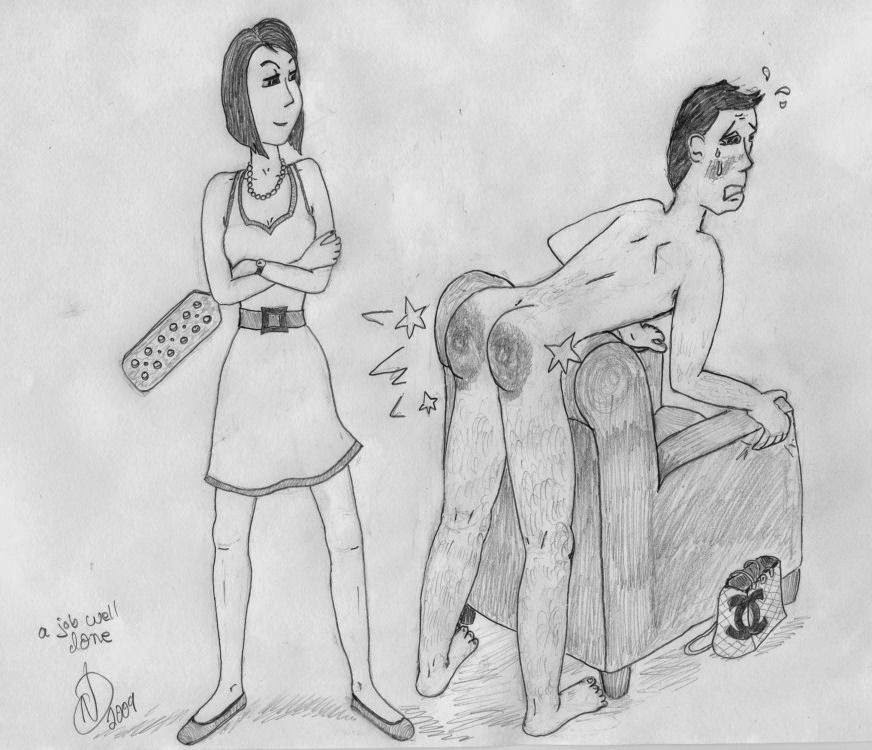 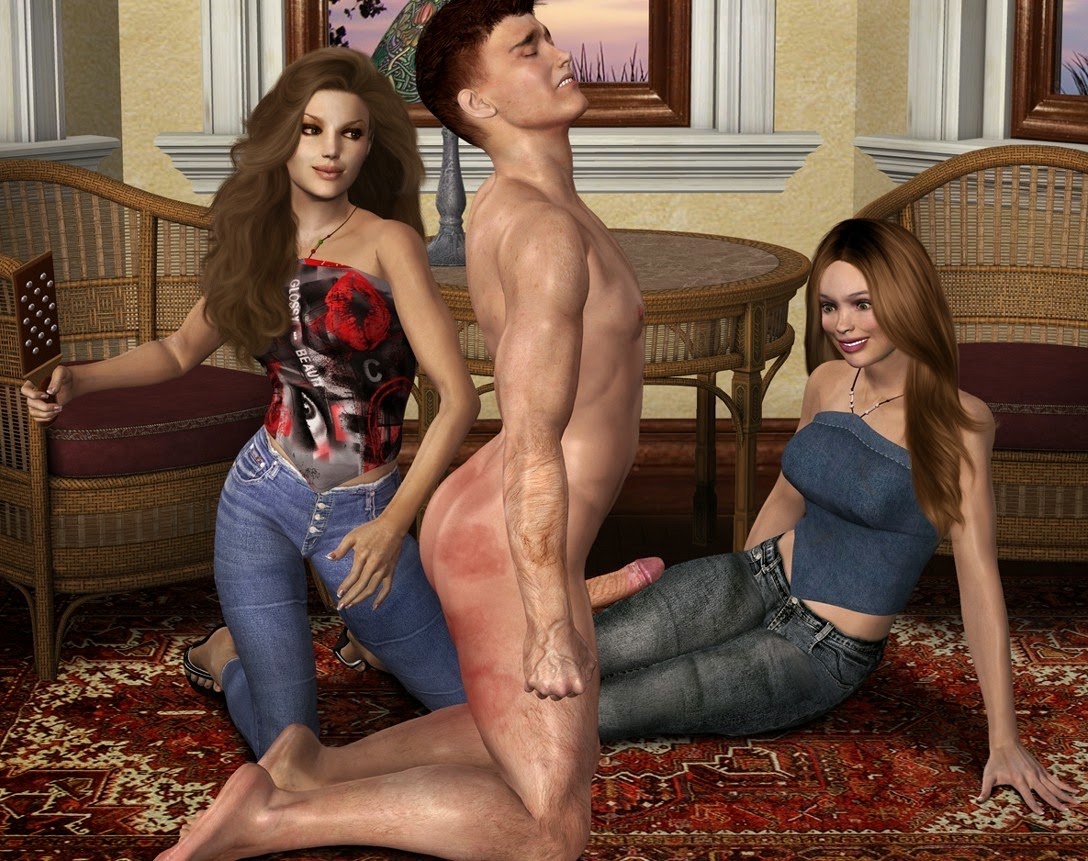 Kathy with Teddy decided on a cat-o- nines...

...and Nancy picked the tawse for Kenny's tender bottom. 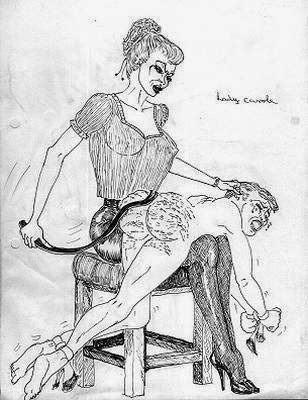 As you can imagine, Dear Diary, it didn't take long for the room to be filled with the sound of crying, howling and wailing from our group of little and not-so-little boys. We all six kept up our spankings until each husband's behind was a brilliantly bright red. Once let up, they comically danced and hopped all over the place, dicks and balls flopping every which way.
"No rubbing that hiney!" Susie hollered at her brat, our Little Dickie, whose little dickie and sack at the moment was giving quite an animated show. 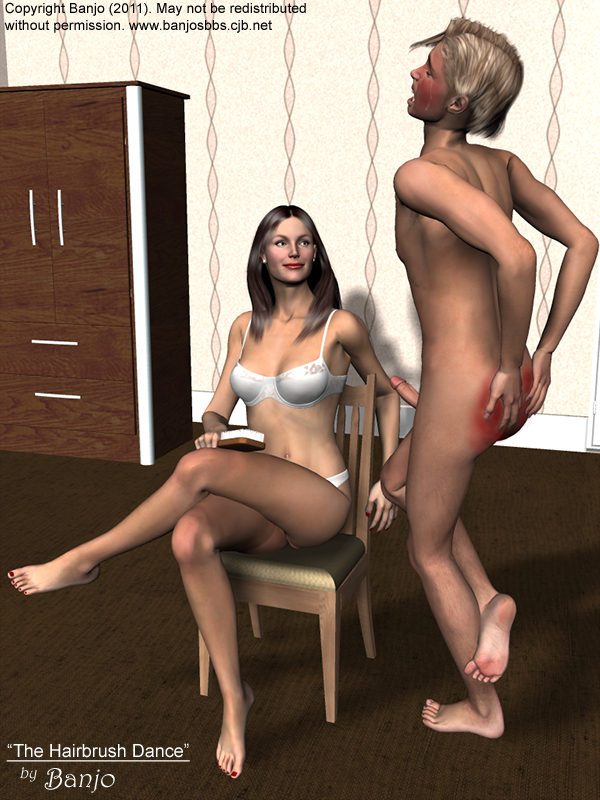 "And, get those dicks hard!" Ray's wife added for good measure.
Quickly, the rest of us gave our boys similar orders, and immediately our well-spanked slaves started pumping away. Then, the doorbell rang.
"Betty," asked my mom, "will you be a dear and get that please? It should be our special guests."
"Sure, mom, no problem," I answered, curious to see who these "special" guests were...
Posted by QBuzz at 02:14