Well, boys will be boys, I guess, and quickly forget their lessons. Yesterday, just before dinner it finally happened, my frustration ended. It was my turn to set the table, but I wanted to see the end of the television show I was watching.
"I want my two slaves to do it," I said when mom called me to set the table.
"No way, I did it last night," responded Teddy.
"Yeah, no way," echoed Dickie.
"Yeah, way," I told them, "after you get naked."
"No way," Teddy repeated himself.
"Yeah, I'm not undressing anymore for any stupid women," shouted Dickie. What a dumb-dumb, mom had just told him last weekend not to call us stupid. I was sure she was going to make him pay for that comment, but she didn't say anything.
"Yes, you are," I informed him and Teddy. "You have two minutes to be naked slaves setting the table."
"No way!" Teddy repeated himself for the third time.
"Me neither," said the Dumb-Dumb.
The belt dad had used last weekend on the brats was still laying by the couch. Picking it up, I shouted, "do it, now!" as I imitated dad in snapping the belt against the side of the couch. 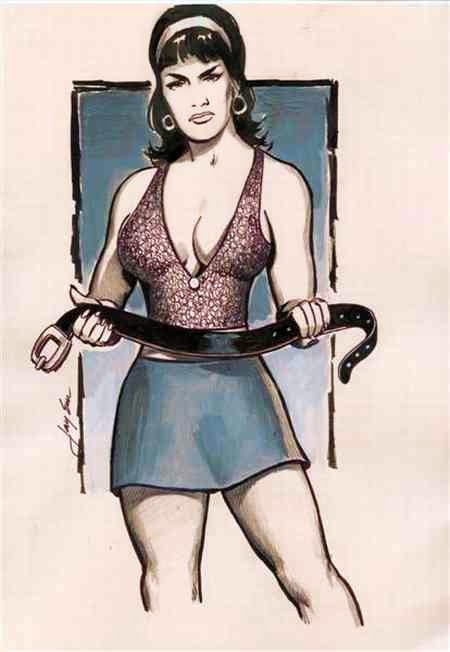 "Theodore, Richard," mom finally intervened, "you heard Elizabeth, you have two minutes to be naked and setting the table. Get to it."
Boy, oh boy, you never saw two men tear out of their dorky clothes as fast as those two did. When they were in the dining room, I asked mom why she was now letting me have them be my naked slaves.
"Because," she told me, "you took charge and ordered them, instead of asking me to do so."
"But they'll listen to you before me," I protested to her.
"Well," mom responded, "that's something we have to work on, starting now. You have to exercise authority over them, be their boss, You have control over them and over their bodies, but you have to use it, not me for you. Teddy is your husband for heaven's sake!"
"But, but," I answered, "I'm only their wife and sister, not the parent!"
"True," she said, "but you're a female, and in this family that now gives you the right. In fact, it would be good if sometimes we had other women in charge of them."
"Well," I said, "all the girls really enjoyed what we did at my birthday party."
"Now, that's an idea," replied mom. "We'll have to arrange something real soon."
"That would be great!" I answered her.
"What would be great?" asked the naked Teddy as he walked into the room, hands cupped over his private parts. Dickie followed, hands similarly occupied.
"None of your beeswax, slave," I told him. "And why are you two covering up?"
"You were warned before about playing with yourselves without permission," mom scolded them. ."It's disrespectful to us females."
"Hands away," I immediately told them. "And come stand right in front of me." Quickly, they complied. The two red faced brats were less than an arms length away, giving me an up close and very personal eyeful of everything they had between their legs. I made sure they knew exactly where I was staring.
As I've told you before, Dear Diary, my 24-year-old brother Dickie is still very much a little boy down there, with, as my friend Kathy put it, a little dickie. A little dickie that did a good job of making it hard to see his little nut sack.
And, like I've also told you, Teddy down there is no man yet, and according to Marcie much smaller than her 29-year-old brother Ray. But Teddy is definitely much bigger in the privates department than Dickie, with easy-to-see hanging balls.
I decided that Little Dickie's little dickie would soon be a hard dickie. And Teddy's bigger dick, too. I reached out with both hands, and began fondling and stroking their now not-so-private privates, my new boy toys.
"Stop it," shouted Teddy.
"Yeah, leave me alone," echoed the Dumb-Dumb.
"Will not," I responded, giving both their balls hard squeezes. 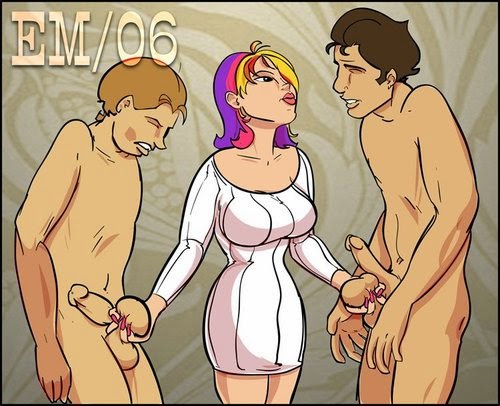 Immediately, they dropped to their knees, shouting in pain, grabbing at their now sore nuts. Mom didn't say anything, she just smiled.
Everything about it was fantastic! The sense of power and control, made easy ecause of their anatomy. Making the brats cry out in pain, just because I wanted to. Knowing that I was deliberately hurting them, and mom was letting me get away with it. The squishy feel of Dickie's little balls and Teddy's larger balls. To be perfectly honest, it was making me feel tingly down there between my legs.
In the middle of all this, dad came home from work. He didn't say anything about what was going on, like having two naked sons with aching balls was an ordinary everyday thing in our house. He greeted me and the brats, gave mom a kiss, and sat down in his easy chair, next to mom on the couch, as if they were about to watch a show.
A show which I promptly put on, with my husband and brother as the naked stars.
"On your feet," I ordered my moaning slaves, "and hands away." As they slowly raised up, I said, "since you want to continue to play with yourselves, I want you to keep those dicks hard the rest of the day. Same rules as last Sunday." The rules were simple, each boy had to keep the other hard, if one went soft, the other was spanked for letting it happen. And if one had a cum, both were spanked, one for cumming, the other for making his brother cum. And I, or any other female present, could help them be hard anytime we wanted. Each female could make them cum too. Which would be a spanking for the boy who came, but not for the female causing it.
"No way, I won't do it!" shouted out Teddy.
"No, I won't" parroted Dickie, still being a dumb-dumb.
Snapping the belt, I told the boys, "Yes you will. And for all your arguing and protesting, you're both getting a spanking, right now."
"No, don't let her," pleaded Teddy.
"Please, mom," begged Dickie.
"Mom isn't going to help you," I told the two brats. "Teddy, over the couch, now!" I ordered, snapping the belt once more.
"Do it!" mom reinforced my edict.
Quickly, Teddy was in position. Just as quickly, I began raining my hand, hard, down upon his bare bottom. I soon had him squirming and wiggling about, his rear rapidly turning pink. Before long, my 27-year-old husband was acting like a little boy, crying real tears and with each spank, making real noises of pain. As his bottom started to turn red, and my hand started to hurt, he was out and out sobbing.
Picking up the belt, I told him, "that was just a warm up." 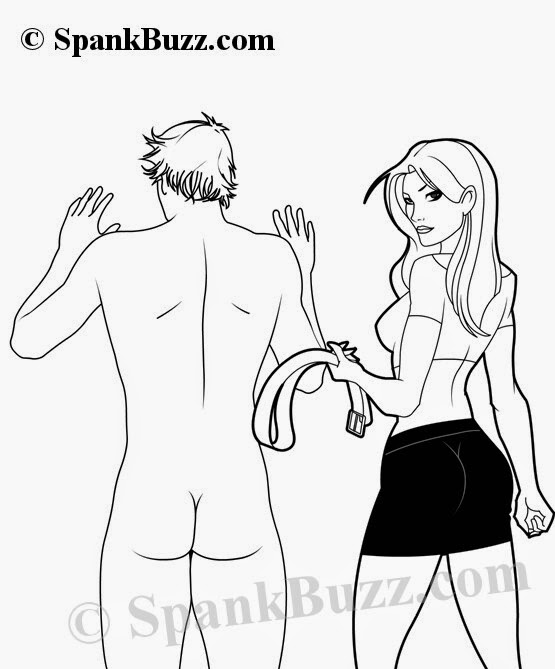 I immediately began whipping his butt, time and time again. From the very first blow, he was howling and screaming, furiously dancing and kicking in place. His wailing soon escalated to an ear piercing crescendo. 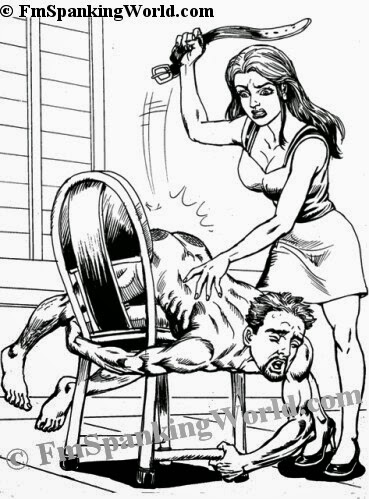 I finally stopped when his bottom was a bright cherry red. "Get up, slave, hands on your head," I ordered him. "Will you argue with me anymore?"
"No," he half mumbled.
"No, what?" I demanded.
"No, ma'am," he replied.
"Ma'am, I like that," I told him. "From now on, that's how you two will nswer me, understand?"
"Yes, ma'am," they both answered in unison.
"Including," mom interjected, "in places like work or the mall."
"OK, Dickie, get your little dickie over here, now!" I commanded the Dumb-Dumb.
"Yes, ma'am," he meekly muttered, blushing at my insult to his private parts. I think, just for the fun of it, I'm going to start calling him "Little Dickie." Even more quickly than Teddy, he had himself in position for a dose of my now somewhat rested hand.
He was crying hard by the third smack. That wasn't surprising to me, as after all, as his little dickie proved, he really was a little boy! Fortunately, as my hand was hurting sooner than with Teddy, it didn't take as long as with my husband to turn Dickie's skinny little bare behind red. And his dancing, kicking, jiggling reaction to the belt was much more impressive and eardrum shattering than Teddy's! 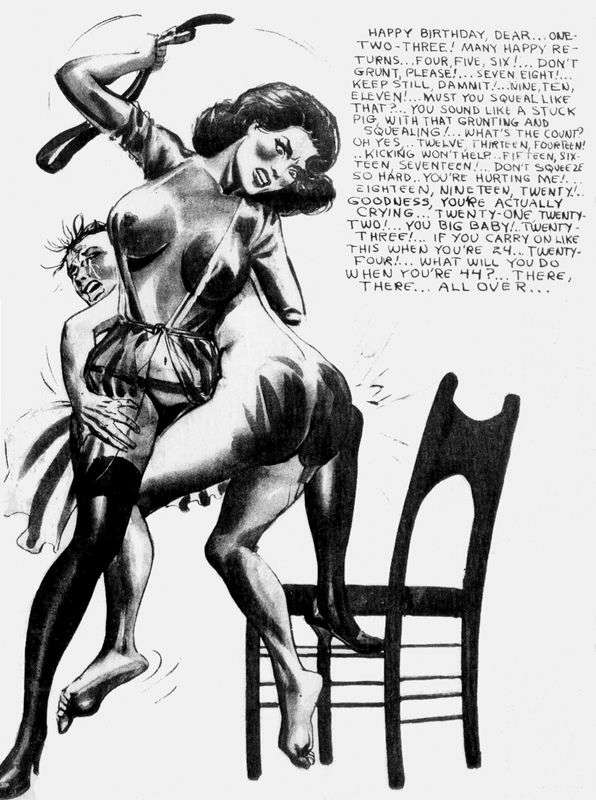 "Stand next to Teddy, hands on head," I instructed the Dumb-Dumb. He did so, without protest, still busily and noisily crying. Teddy wasn't sobbing out loud any more, but he was still sniffling, with tears running down his cheeks. Both brats were finding it impossible to stay still, shuffling their feet about, doing an in-place jig.
With the digital camera, mom snapped a few pictures, front and rear. "For your collection, dear," she told me.
"Thank you," I replied.
"You're welcome," she answered.
"Now, slaves," I addressed the brats, "I do believe I said those dicks of yours were to be hard the rest of the evening. So get to it!"
Posted by QBuzz at 12:18