Betty's Diary 1.1 My Greatest Birthday Ever!

A big fantasy of mine has always been to be part of a femdom family, where all the males are dominated by their strict wives, mothers, sisters, aunties, grandmas and female in-laws (and their friends!) A lot of this was shaped long ago by Betty's Diary, a story by Nialos Leaning that also first tickled my interest in guy-on-guy action. The story really struck a chord with me (I was the same age as the original Teddy when I first came across it) and it filled my dreams and fantasies for months after. But years later when I'm all grownup it seems highly inappropriate, so I've rewritten it to be about a bunch of dorky middle-class husbands getting well and truly dominated by their wives and mothers-in-law.
I'll post it all over the next few weeks, along with as many relevant toons as I can find to illustrate it. I've stuck as closely to the original spanking and femdom fest as is feasible, though I've also snuck in some new bits to satisfy my love of cuckolding and dominant daddy-types.
And as this is starting on Friday 13th, hopefully a few wives and matriarchs will be inspired to start such a regime for their 'unlucky' husbands and in-laws! 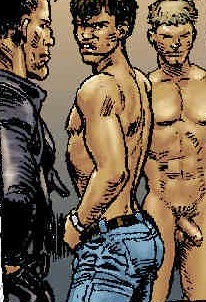 "Well, what are you waiting for?" demanded mom. "Get those underpants off, now!"
"Now!" echoed dad, snapping his belt once more against the couch. Very, very fast, the brats had their briefs off, which they held in front of themselves, trying to hide their privates from us.
"We'll have none of that disrespect," shouted mom, "drop those to the ground, now!"
"Now!" echoed dad again, once more snapping his belt. As their underwear went to the ground, the brats' hands went to cover up.
"Hands away and at your sides," mom ordered.
"You heard your mother," said dad as he again snapped the belt. "You don't play with yourselves like that in public."
"Unless told to," mom added, to my complete surprise and bewilderment. Right away their hands were at their sides. I couldn't believe how red their faces were.
"Well, well," taunted Kathy, "looks like little Dickie has a little dickie." We all seven giggled at this. I quickly glanced at mom, sure she would say something. But she didn't, she simply smiled.
"And I thought," said Marcie, obviously stung by the criticism of her fiance, "that Teddy was a big strong man. My brother Ray's much bigger down there than that." This, of course, caused more giggling on our part. I did wonder how Marcie knew what Ray, who's 29, looked like, but didn't ask. Teddy's penis was definitely bigger than Dickie, who most definitely was little. Oh, excuse me, I mean his dick, mom said that as long as the boys were naked, we were to use the "dirty" words for their privates. So, I guess I should also be saying "balls" instead of scrotum. And to think, mom always threatened to wash our mouths out with soap if we used such words!
I do know one thing, however. From the 'encounters' I've had with other men, my husband is no real man yet, even if he thinks he is. He's not even close, he needs lots more hair, and he better hope his prick and balls do a whole lot more growing (not much chance of that now I guess!). His dick does nothing to hide his sack, which hung down for us all to see.

This is where I level with you dear diary. Teddy and I married straight out of college, and he sure talked a good future, claiming he would earn loads of money and take care of me. And now five years later we're still living with my parents until we can afford a house of my own. Believe me, as I stared at my husband's pale, scrawny office-boy physique, naked apart from that stupid watch and his geeky glasses, showing everyone that shrimp dick that had given me so little pleasure over the years, I was eager for him to suffer.
"Teddy, get over here," dad commanded my husband. "You need a taste of this belt."
Which he promptly got...
Posted by QBuzz at 11:24