I've been fascinated by corporal punishment for almost as long as I can remember. So needless to say, when as a boy I came across references to spanking/whipping/The Belt/The Cane in books or other media, it excited me in ways I didn't quite understand...
And there were A LOT of references. History books in particular seemed to delight in recounting what used to happen to naughty children (and adults) in the 'good old days'.
One of my most spanktastic sources of historical kink was the Horrible Histories, a series of children's history books that attempted to make history fun and accessible through jokes, cartoons and dark humour. They're actually very good, and they are also choc full of references to corporal punishment – so much so that I suspect the author or editor may have had an erotic interest in such things (or maybe they just knew many of their readers would have!)
The most interesting stories were usually tucked away in sections with names like 'Terrible Schools' or 'Vile Childhoods', with tales of young unfortunates being caned/strapped/whipped/birched and more by their sadistic elders... and I lapped it up!
I still find many of the fantasies these books produce to be arousing today, so as a tribute to the kinkiest set of history books in, well, history, here is a series of manips based on some of my favourite Horrible Histories: 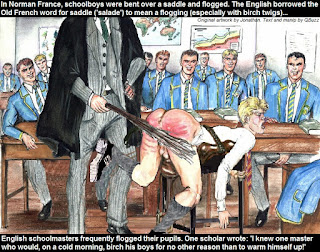 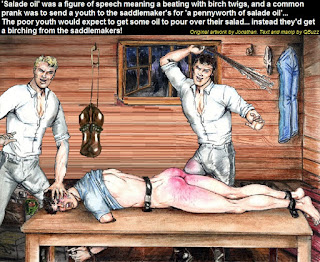 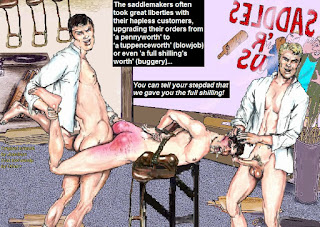 The first Horrible Histories book I read was 'The Terrible Tudors', and on reaching the section on sixteenth-century schooling I was greeted by this glorious description:

Needless to say, after reading this, I lay awake many a night thinking of those innocent schoolboys having their bare bottoms roasted (and before too long, imagining myself in their place...)
This scene provides part of the inspiration for my first manip. You'll notice that I haven't attempted to give these manips a Tudor/medieval setting. Sometimes it's nice to imagine what it would be like if this sort of thing was still going on... perhaps society has decided corporal punishment is a good idea after all and it has been brought back (or never went away, and, like the amazing alternate universes of the classic British Spanking Magazines, is much more severe than it ever was in the recent past!)
I'm sure you're aware of (and maybe even attended) educational historical establishments where modern-day children get to sit in old-fashioned classrooms while their teachers strut about in caps and gowns swishing canes and trying to act menacing (I know my teachers did!) Perhaps a Finishing School trip to one of these such establishments has got out of hand, and the schoolmaster can't resist actually using the birch on one of the bottom-formers, much to the amusement (and arousal) of the bigger boys. Or perhaps the first manip shows an actual Finishing School, where the Master has decided to quite literally Bring Back the Birch!
I actually did some research into this Henry Peachum source, and it turns out that it was probably the prefects who whipped boys to warm themselves up, rather than the teachers. While this makes a little more sense, I certainly prefer the image of the sadistic schoolmaster towering over his unfortunate charges as he roasts their bare backsides for no reason whatsoever! (Though the original wording 'to get himself in heat' certainly conjures up some possibilities...)

After 'The Terrible Tudors' my education continued with 'The Vile Victorians', which contained a charming account of a family who did all their washing on a Sunday, so the children were always strapped by the priest at school on Monday morning for missing church!
And then there was this 'traditional Victorian motto': 'For bad boys, a yard of strap is worth a mile of talk!' Needless to say, reading such words had this particular boy squirming on my pampered bottom as I imagined it being repeatedly stung with a yard of broad leather strap!
The book 'Cruel Kings and Mean Queens' was absolutely packed with spanking stories, such as how the boy king Edward VI was thrashed by his tutor, and how the families of the German King Georges considered their English subjects to be a light touch, and how their palaces were filled with the sounds of weeping, well-whipped children locked in cupboards. The book also repeated the (apparently apocrypal) words of King George V, referring to a long line of harsh royal discipline (complete with an illustration of him holding a whip!):
'I was frightened of my father [King Edward VII]. He was frightened of his mother [Queen Victoria]. I'm damn well going to make sure that my children are frightened of me!'
I quite like the idea of Queen Victoria (a BBW domme if there ever was one) birching the living daylights out of all those poor little princes and princesses!
There was hardly a Horrible Histories text without some reference to spanking. Just look at these scenes from 'The Measly Middle Ages' (which showed it wasn't just the boys who had all the fun!) 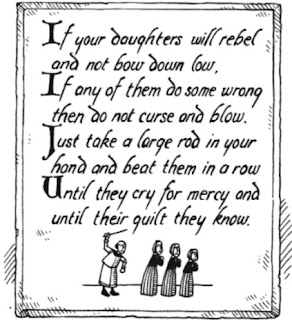 Then there was this rather more fleshed-out story from the same book: 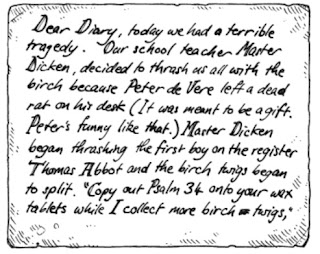 I just loved the unfairness of it... it turns out later that the schoolmaster was interrupted in fetching the birch twigs and does not punish anyone else in the class, so I always used to think of the unfortunate Thomas Abbot getting thrashed by his enraged schoolmaster for a crime he did not commit, getting it so hard the birch split and couldn't be used on any of his (no doubt smirking) classmates. Perhaps this could even be the setting of the first manip, though no doubt if that were the case the other boys would be looking a lot more nervous!
There's something so hot about undeserved punishments, and I came very close to using the Thomas Abbot story as the basis for my tribute (who knows what the bigger boys did to his poor ravaged bottom while the Master was out hunting for birch twigs... )

But there's still a whole lot that's unfair about the extract on which I did base my tribute. It actually comes not from Horrible Histories but from 'Wicked Words', a spinoff in the same style: 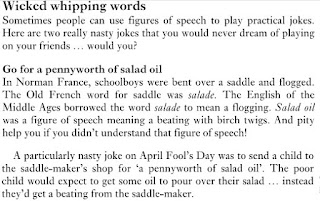 I love the casualness of the references: 'schoolboys were bent over a saddle and flogged', 'instead they'd get a beating from the saddle-maker'. They sound just like everyday occurrences... which hopefully they were!
It includes so many of my kinks – clearly, even as a boy I found the idea that a random working man could just thrash me for no reason to be extremely titillating.
It must have been a terrifying (and thrilling) time to be a youth. Literally any adult could bare your bottom for the harshest punishment on the slightest pretext – remember that these are BIRCHINGS that these (un)fortunate boys are subjected to!
And it raises the question of who exactly is sending these unwitting young men off to the saddle-makers? Their fathers? Stepdads? Big brothers? Schoolmasters? Wicked uncles? Neighbours? Men of the church?
Though perhaps a few of them aren't sent by anyone at all... I can well imagine myself as a curious, trembling teen, voluntarily visiting the saddle-masker and asking him for a pennyworth of salade oil... 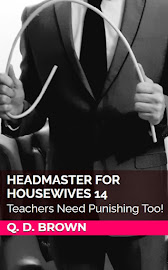 Read more about The Headmaster and the Headmistress: A Romance
Buy it now on Amazon
Read it for free with Kindle Unlimited 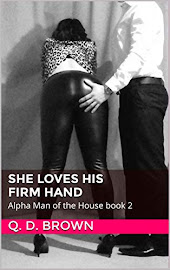