I'm sure everyone remembers the fear of starting college. Now imagine you're from a liberal family who've never so much as given you a clip round the ear, and you're being sent to a traditional British finishingschool... 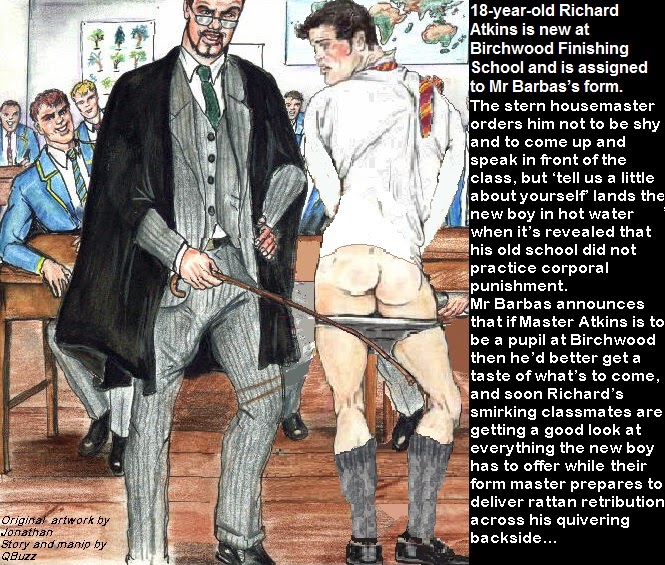 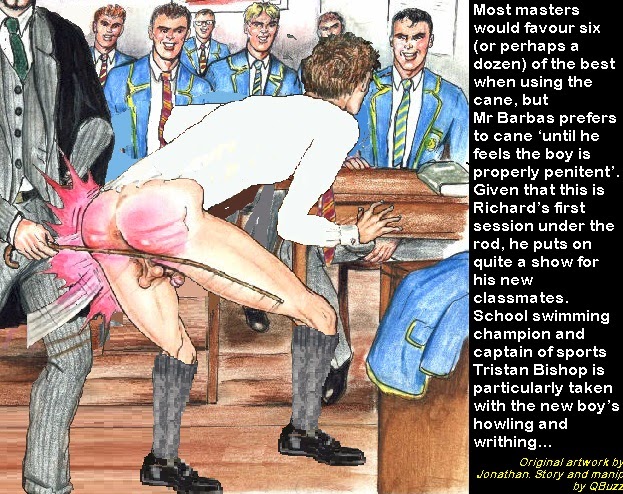 I've started to think of finishing school fantasies as prison fantasies with kinkier uniforms. Instead of musclebound thugs looking to assert their dominance with a bit of beating and buttfucking, you have thick jocks and corrupt prefects who take great pleasure in thrashing and fucking. Instead of sadistic guards turning a blind eye you have masters who have turned caning into an art form and love the thought of all the illicit rogering that goes on after lights out, and occasionally even participate themselves! And of course instead of tight, middle-class whiteboys getting their asses fucked you've got all the swotty, skinny, unsporty nerds who offer up their assholes for the bigger boys.
Like in prison, its much worse to be a 'fresh fish' in boarding school like Richard. All the masters want to see how hard they can beat the new boy and all the top-formers want a taste of his firm little butt. And back at his dorm, even if he isn't accosted by a top-former in the dark, there's no doubt all sorts of mutual masturbation sessions, biscuit games and arse play that the horny guys engage in. If Richard's lucky he'll be in a compassionate dorm where everyone gets a turn at playing daddy. If not he'll be bottom of the bottom bitches and spend his night biting his pillow as his dormmates take out their sexual frustrations on his sore little behind. I'm sure he'll enjoy himself either way - after all, everyone knows that middle class males love taking it up the arse!
And I did definitely mean to imply that Mr Griffiths was expecting empty showers because he wanted to show his new assistant that 'what goes on at Birchwood' goes on between the masters as much as the students. I'd love to watch those 2 muscular studs going at it, though not as much as I'd like to be Richard when he inevitably ends up with one at either end!
Posted by QBuzz at 08:52