Spanking and cuckolding can be even crueller at Christmastime, and the pain and humiliation doesn’t stop during the season of goodwill to all men!

Needless to say, all those middle-class males in chastity will be subjected to all sorts of humiliations in their desperation to avoid their weekly spanking from Mom or achieve their monthly nut in front of their wives’ friends… 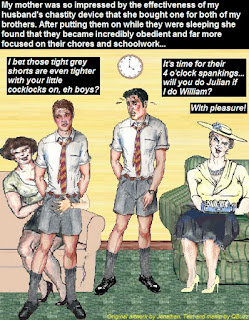 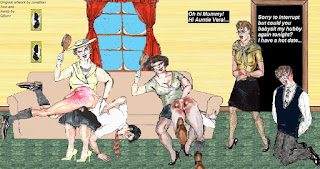 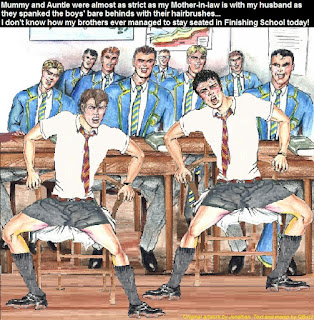 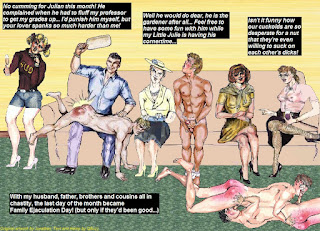 With all the negative coverage around ‘toxic masculinity’ these days, it’s not too far-fetched to imagine a ‘Chastity Craze’ sweeping the nation. It might start with an article in a respected academic journal on how a sample of young men showed much less aggression during a month in a chastity device. The press would pick it up, and chats on Mumsnet and in matriarchal Whatsapp groups would start to debate the merits… and before you know it, mothers across the nation are sneaking into their 18- and 19-year-old sons’ bedrooms like a dominatrix Mrs Claus… and the unfortunate boys are waking up on Christmas morning to find themselves locked in chastity for the rest of their lives!

The mothers would quickly discover how much more obedient a boy in chastity is, and how much more willing they are to do their chores and homework. Spankings would continue (or start) for even the most minor misdemeanours, for what respectable matriarch doesn’t secretly enjoy roasting bare male backsides with the palm of her hand or the back of her hairbrush?

These poor boys might be approaching the end of Finishing School and preparing to finally unleash their hormone-fuelled sexual urges on the females at college… but mother certainly won’t be handing them the keys to their chastity devices just because they’re heading off to university!

The girls at university would quickly realise the benefits of taking a cock-locked, obedient middle-class male as a boyfriend (while still enjoying the freely swinging dicks of the boys who were just too masculine to be locked up!) And when she goes home to meet mother, her future mother-in-law will not hesitate to school her in how chastity, spanking and cuckolding can make for a very happy marriage – demonstrating on her husband if necessary! When the Aunties and other relatives get involved, it really will be fun for all the female members of the family!

You may have noticed that the fourth pic includes a stealth tribute to one of my favourite parts of  Betty’s Diary. There’s something deliciously sadistic about a woman not only enjoying soundly spanking bare male bottoms, but also relishing the thought of how sore and painful they will be to sit on all the next day! And no doubt those burly top-formers in the background will be unable to resist giving the brothers’ well-brushed backsides a sound buggering in the boys’ bathroom before hometime!

In the first pic, I deliberately left it open as to whether the young blonde gentleman is the blonde girl's boyfriend or her brother – if it's the latter I'm sure his stepdad will have been putting him through plenty of training in the sissy arts…

Oh, and here’s a variation without the Christmas hats, showing that spanking, cuckolding and chastity is for life, not just for Christmas!