Nate manips: Bulls Spank Cuckolds in Front of the Family

There aren't many artists who do humiliation as well as Nate, with his scenes of grown men having their pants pulled down and their bare bottoms smacked like little boys by and in front of big, buxom matriarchs – and it's only going to be even more deliciously humiliating when it's the wife's lover doing the spanking!

Surely Nate's statuesque goddesses would agree that a wife needs a 'real man' around to help her keep her husband in line and satisfy her womanly needs – after all, those 'little boys' aren't going to be up to the job are they! 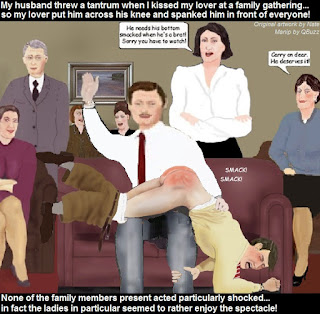 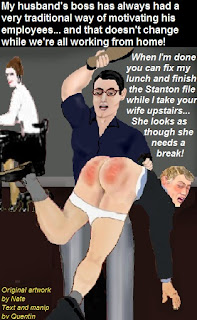 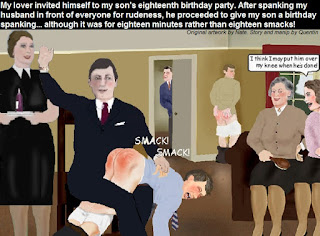 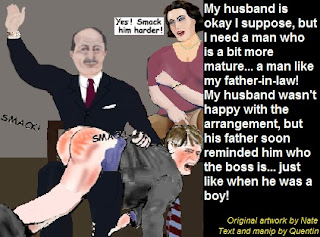 In the second manip I also wanted to tap into the potential eroticism of the past year, with so many unique and different situations, such as so many people working from home. While there have been plenty of headlines about how difficult it has been to have affairs, one wonders how many unreported instances there have been of frustrated wives making their extramarital relationships 'official', and telling their husbands that they will be cuckolded whether they will like it or not. Perhaps bulls have even be moved into the family home to 'bubble' with their lover's families and keep the wife satisfied (and the husband in line?). And with everyone trapped together in such close proximity, no doubt the kinkiness of the cuckolding antics would ramp up accordingly...

The scenario depicted would be hot even without lockdown: a dominant boss who keeps his younger male subordinates in line with hard, humiliating spankings, and who gladly fucks their willing wives while they slave away for his business. Bring this inside the supposed sanctity of the marital home, now violated thanks to the working-from-home directive, and you have an incredibly cruel (and therefore incredibly hot) cuckolding fantasy!

I also love the idea of cuckolding spilling over into families, and anyone who has read Father Jim's comments on this blog will know just how disgracefully delightful such fantasies can be!

For the first and third manips I wanted to make the most of the humiliation that Nate draws so well. No doubt the smirking spectators would enjoy watching the spectacle just as much as when their mothers, friends or sisters are doing the spanking – if not even more so...

I know that in America birthday spankings are seen as a fun little joke, but Nate's British mothers probably only adopted them (unlike other dreadful American concepts such as Halloween, which is enough to turn any middle-class English matriarch's stomach) because they saw them as a way to bring the birthday boy down a peg or two. In the third manip I imagine the party attended mostly by mature relatives was not the birthday boy's favoured method of celebrating his 'special day'. He probably had to dress up smartly in shirt and tie at his mother's insistence (and he'd better not argue... he's not too old for a smacked bottom after all!)

And to make matters worse, his mother's lover decides to turn up! He'd heard them screwing while his father was out of course, and then later (and even worse) when his father was present, but now he and the family are getting a thorough demonstration of who the real man of the house is!

I love the expression of despair on the boys' face... maybe he's realised that now he is 18 he can be expected to participate in fluffing and cleanup duties when his father is unavailable! And no doubt one day he too will bring a young lady home, and she too will witness him getting spanked by his mother's lover just like his father before him, and maybe her mother-in-law will let her fuck him too (a young wife needs an older man to show her the ropes after all)... that's if she doesn't already have a stud lined up to cater for her carnal needs!

The fourth manip is just a slight remake of a previous Nate manip I did, so that it caters for my recent penchant for dominant father-in-laws getting involved in cuckolding. Though the original showed a son being spanked (and more) by his mother's lover while his father was away, so I suppose that would fit in with this series' family theme as well ;)

Although I love Nate's art, his lack of male spankers makes it difficult for me create manips with a cuckolding theme, so this will probably be my last series featuring his work. In fact this series itself was only possible because in the years since I first manipped his work I discovered this (by me at least) previously unseen beauty: 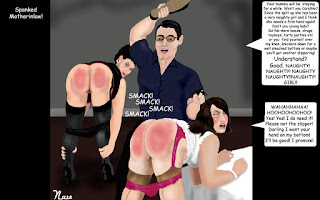 As far as can tell, it's the only M/F artwork Nate ever created. And it's a classic – mothers-in-law are always plenty of fun, no matter which end of the slipper they're on :D

I also only tend to create manips with works by artists who have retired, but Nate is something of a mystery in that regard. His original website closed over ten years ago. But then five years or so later I started seeing new work by him scattered across various blogs and Tumblr sites, almost all of them now defunct. There was no sign of him opening a new website, blog or otherwise, and I don't know where his new work was hosted.

And then he disappeared again, this time seemingly for good...

Here is another recently discovered piece you might not have seen, which I think is Nate's only outright F/F scene (though there are hints of it in some other works): 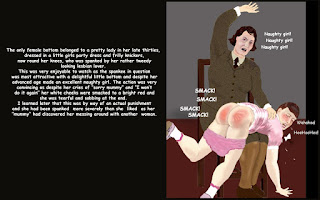 As a final note, I have noticed that some artists have started posting versions of their works with and without the captions, which can sometimes be preferable if the speech bubbles obscure the action! So here are uncaptioned versions of three of these manips, in case you would prefer to imagine your own story... 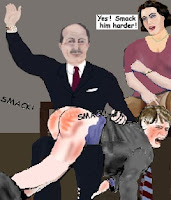 I may have forgotten to do it with the first one though...