For some greedy gals, it's not enough to keep a stable of studs in addition to their husband and fuck as many alpha males as they want...they have to make their cuckolds suffer as well! 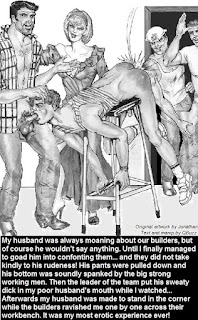 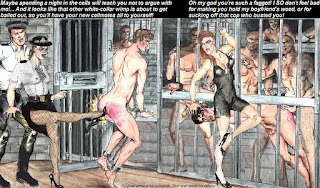 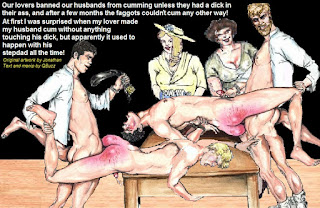 The second pic is an ode to the traditional uniform of the British policewoman, which is definitely one of my favourite uniforms for dominant ladies. I originally intended to create a much longer series featuring an additional policewoman (larger, older and much more matriarchal). The Wicked WPCs would visit schools, where they would soundly spank the boys and young male teachers in front of the giggling girls as a demonstration of what happens to lawbreakers. They would visit suburban homes and reassure middle-class mothers concerned about their sons' behaviour - by soundly thrashing the innocent boys and perhaps even suggesting they experience a night in the cells...
Back at the station the wicked ladies would have fun fucking their studly male colleagues. And if their husbands complain they'll soon find themselves being arrested and flogged, and even thrown in the cells to be mercilessly buggered, as is happening in the last pic (although if you aren't wedded to the cuckold angle, I suppose he could be an obstructive paper-pusher. Or a motorist who got too mouthy at a traffic stop...)
Particularly cruel is that the wife is letting hubby's cellmate finish fucking him before bailing him out. This is a niche and especially cruel subset of cuckolding porn: a wife who visits her husband in prison, knowing he'll be getting pounded, no doubt while cuckolding him rotten on the outside. And given how the bail system works, with halfway houses and corrupt parole officers and the like, the husband might be back inside soon enough - but seeing how his wife treats him, maybe it won't seem so bad!