Ian Hamilton has long been one of my favourite artists, and is still going strong creating brand new work on a regular basis. Like most artists, he is game for commissions, but I never realised that he was enthusiastic about creating gay and cuckolding artwork until this year... at which point of course I couldn't resist asking him to illustrate some of my dirtiest fantasies!
And it will come as no surprise to regular readers of my blog that the first thing I asked him to draw was a prison sex scene... 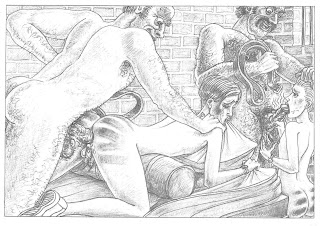 'You'll be biting the pillow in prison' is a phrase I've heard many times over the years, used as shorthand to suggest to a white-collar criminal what he'll be doing while his big burly cellmate buggers him senseless. Like the many other suggestions of what would happen to a nice middle-class boy like me in prison, the phrase always sent a shiver down my spine. But I don't think I've ever see an actual depiction of prison pillow-biting, so I thought it was high time Ian Hamilton added to the small but perfectly formed pantheon of gay prison sex art and showed a pillow-biter 'in the flesh'!
Needless to say I am very happy with the finished piece. It captures so much of what I fantasised about happening to myself in my early twenties... the helpless vulnerability of the submissive guys in the dank surroundings of the cramped cell, particularly the pillow-biter himself... I love the detail of him not only biting the pillow but also pulling the mattress off the bunk, such is the intensity of his fucking! His expression is perfect... so desperate and woeful, but also with a hint of acceptance, as if he's needed a big thick cock in his ass all along and his Prison Daddy is satisfying a deep, long-held desire... only confirmed of course by the way his semi-hard dicklet is rubbing against that conveniently placed bolster!
A word too for the way Ian draws his belts... they look so gorgeously thick and leathery, real Daddy's belts for some real Prison Daddies! The scorching welts on the boys' buttocks suggest how they were used to encourage them to suck cock and take dick, and no doubt also make things a little easier - the penetration of that huge dick is probably a bit less painful among the inferno of the bitchboy's backside! Though if the Prison Daddies managed to stash some belts somewhere, they no doubt managed to hide a bottle of lube in the cell too...
In the second pairing, Ian has captured another of my favourite submissive gay fantasies... to be made to suck a sweaty cock until it is as clean as a whistle! No doubt the other young cellmate is hoping that if he sucks cock well enough then he will be spared an assfucking... but I bet he won't!
The dominant convicts certainly look older and more experienced. No doubt they have a few years on the clock, and it is a real treat for them to have landed such young and nubile cellmates.
Perhaps the unfortunate young prisoners have just arrived, and are being given an immediate introduction to life in prison (notice the guards haven't even got round to making them remove their watches yet... or maybe they and the older cons share my fetish for seeing skinny betas spanked and fucked while wearing dainty, unmanly wristwatches...)
Perhaps there is even an element of  'protection' going on, with the old lags agreeing to take their naive young cellmates under their wing, like in one of my favourite descriptions from a long-defunct gay prison porn site:
They were both new, and the older inmates couldn’t wait to get hold of their precious assholes. Matt and Tom knew they’d have to team up with someone and pay for protection in their own way. Their cellmates gladly agreed to protect them, and very soon their huge balls were slapping up against the guys’ firm asses. Ouch!
Or maybe all the men in the picture are weeks, months or even years into their various sentences, and this is just how the weaker inmates have to spend their evenings! Perhaps they aren't even cellmates, and have been sold to the old lags for a pack of smokes, or given as a reward for some gangland atrocity?
Do the unfortunate young guys even deserve to be in prison? Are they a couple of small-time drugs dealers who attempted to top up their college funds and are now doing hard time?
Or a couple of backpackers who were supposed to be heading off to college, but they got forced to carry a package of drugs into the USA from a less enlightened country (or even had it slipped into their luggage without them noticing) so now they're heading off for a sizable stint in the big house!
Or perhaps they're completely innocent, framed by a corrupt cop or a merciless mafia don?
As usual, my fantasies tend towards them being a couple of unfortunate innocents who through no fault of their own will spend the best years of their lives getting their tight little butts ridden and roasted!
As you can see, Ian Hamilton is capable of illustrating a wide variety of erotic fantasies, so if you are interested in seeing your filthiest dreams come to life I strongly recommend commissioning him via ianhamilton96@hotmail.com
Posted by QBuzz at 15:50