A few years after the honeymoon has ended, it's fair to say most wives may be getting a bit bored in the bedroom. They'll have tried to liven things up with spanking and dressing up and bondage and strapons, but in the end there's only so much you can do with two people. And while their husbands will probably beg them to bring another woman into the marriage bed, there's few things a middle-class lady likes more than to watch two guys going at it. And when it comes to marriage, what the wife wants, she gets! 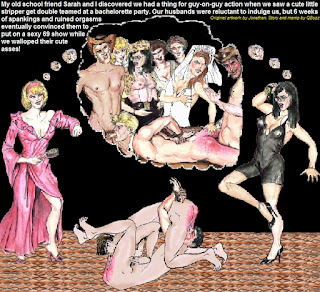 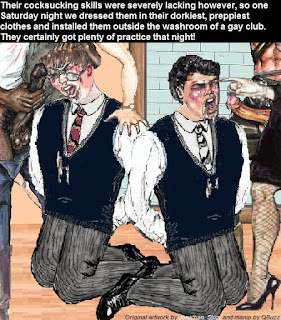 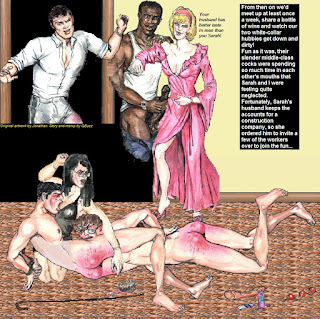 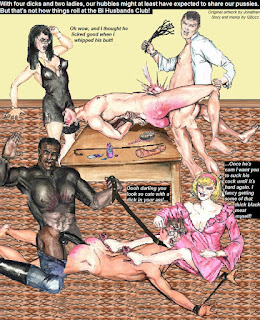 With the modern professional female having such a taste for guy-on-guy action, those who cater for kinky ladies have had to match the demand. So male strippers now bring along a cute little twink to get used and abused on stage to the squees of shrieking women. Husbands are forced to watch hours of gay porn with their wives until they just can't help getting turned on by it (yeah right!). Male escorts find themselves hired to assfuck whimpering subby hubbys just as often as they get paid to blow businessmen.
Let's face it, these women tend to be married to men who would definitely be bottoms in a gay relationship, so they have no problem finding big butch guys to play with. If what I've read online is true, then gayguys love 'turning' straight boys, so all a wife needs to do is dress her hubby's cute ass up in a preppy tank top and tight slacks, then take him to a gay bar and announce that he's looking for love!
And of course, if the wife isn't entirely satisfied with playing with herself while watching her husband squeal like a piggy, then there are plenty of dominant bulls who'd love to put on a show with hubby before fucking her senseless, while hubby stands sobbing in the corner or licks the bull's balls and shaft as it slides in and out of his wife's holes! To the wives' delight, most of the bulls who like to do this tend to be muscular black men, who got a taste for fucking tight middle-class assholes in prison!
Posted by QBuzz at 12:06