The wedding vows say 'Love, honor and OBEY' for a reason! If modern husbands had even an ounce of backbone, then their wives would know exactly what to expect if they ever strayed:

Of course, in the 'good old days' there were more real men around for women to marry and if these muscular studs got even a hint that their wife was not exactly 'forsaking all others' he'd have his belt off before you could say 'while you're down there'. 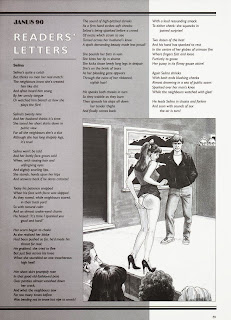 And if he was really displeased he could always make her punishment public... 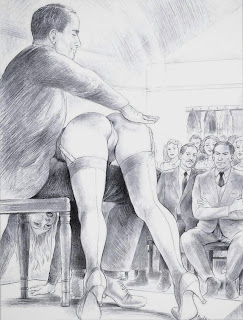 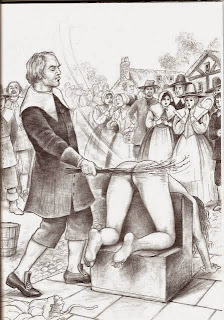 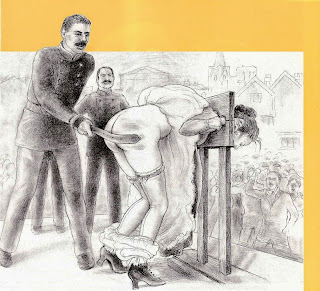 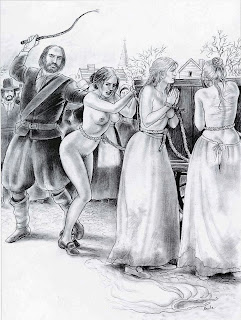 The grizzled old crusader in 'The Legend of Lady Lenora' is certainly of this ilk. When his young wife is caught frolicking with a squire he draws inspiration from his travels to teach her a lesson:

Five years enduring her spartan exile waiting for her lover to reclaim her. Five years of public whippings by her gaolers on the orders of her husband.
...
One young man in particular, Gavin, reminded her so much of her lord before they were married. He was strong and kind and open in his love for her, a little too open for his own good, yet his naivete was in itself touching.
Her scowling lord became increasingly jealous and their rows frequent. During one he yelled at her: 'In the desert lands they have many wives and they whip the ones who disobey them.' 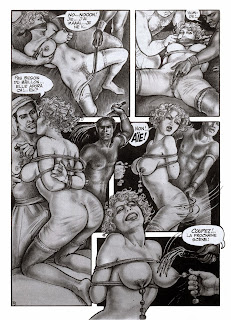 As she was driven out through the castle gates her husband, drunk and staggering on his weak leg, shouted: 'Take her, take her from my sight and don't let her back until she has repented of the hurt she has done me and the shame and humiliation she has brought me.
Whip her on the first day of every month, a stroke for every day of the month. 365 strokes a year until she agrees to crawl back to me on hands and knees to beg my forgiveness.' 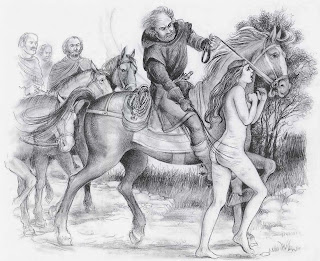 ...
'In my drunkenness I had forgotten I had ordered your whipping. Thank you for drawing it to my attention. Now sober, it seems a most appropriate punishment for your treacherous disloyalty. I have thought about you on the first day of the last two months and felt only pleasure at knowing yon are receiving the punishment you deserve. I have written separately to the warden confirming that the whippings should continue until you show a genuine desire for forgiveness.'
She wrote back after every whipping imploring him to give their love a second chance. 'How can our love grow if we are apart? Whip me yourself in our bedchamber if you want but spare me the humiliation of being flogged by my gaolers. All I see is their leering faces taking pleasure in spreading me over the trough and whipping me like a whore in a marketplace.' 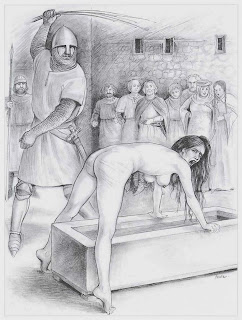 Even in these modern times with their floppy-wristed beta male husbands, there is still the odd man willing to take his flighty young wife in hand. Usually a more experienced older husband who has rogered a few married secretaries in his time, as in 'A Room With A View': 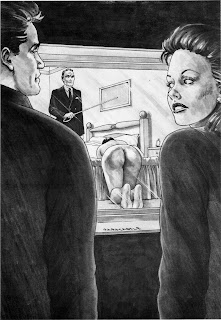 'I'm so sorry, darling,' she was pleading in an urgent, breathless voice.
'I truly am. I love you with all my heart and wouldn't do anything to hurt
you. But you were away in Denmark and Peter came to the house and we drank
and ate and then drank some more and by the time I noticed the clock it was
too late for him to leave. I didn't mean anything to happen...' 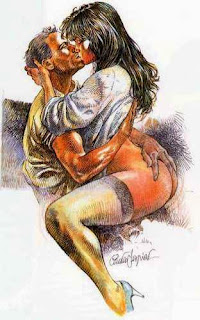 I clutched Gus by the arm. 'Oh no,' I whispered, 'she's been unfaithful to
him and he's found out.'
'Certainly sounds like it,' Gus murmured back. 'I wonder how?'
...
'Why doesn't she refuse the cane?' I said to Gus, wondering at her silent
agreement. He gave me that look which said simpleton, and I already knew
the answer. Penny could refuse the cane but she knew she would be punished
in one way or another. Robert could devise something much worse and
longer-lasting. They were due to island-hop in the South Pacific this
summer. Penny could forfeit that, and never know if Robert took someone
else with him. He could easily make up an excuse to have a companion, to
help keep contact with the office while he was away.
...
Which made me feel even more wicked to be secretly watching Penny receive
her punishment for adultery.

...
'I'll never do it again,' we heard her say in a tiny, plaintive voice, so
alien to her normal bright confidence. 'Not even think about it, my darling
Bobby. Not ever again, I really promise. I'm sorry... I deserved it all.'
It was then that Gus switched off the eavesdropping system
...
He took my hand and, with a gentle yet urgent movement, reminded me of what I had earlier seen him adjusting. 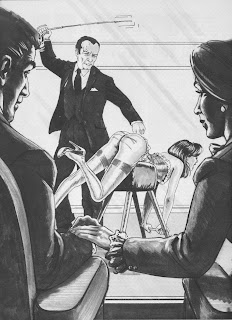 And later than that, after Gus had shown me visible evidence of how eagerly he needed attention, and I had sought tactile confirmation of his stunning firmness of purpose, another set of girlish buttocks began to clench and unclench, tighten and relax beneath him, and another feminine voice was moaning and whimpering, gasping and crying out...
I felt so pleased, and so naughty, that I do believe I deserve the cane.

Sometimes an experienced old hand can show modern husbands the way, as in 'Victim?': 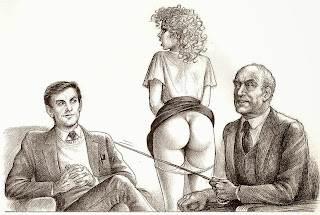 Ronald was uninhibitedly forthcoming, and it was an incredible piece of good fortune when he disclosed to Marcus that he had actually used to spank his mother during the early days of their marriage.
'Needed to, my boy. Lovely gal, but one of the flightiest young women I have ever met, and with me being away so much...'. He looked at his son searchingly as if suddenly doubtful of his parentage. 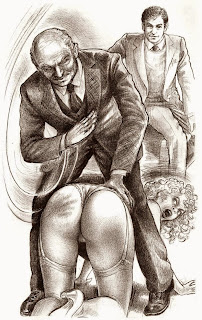 But often wives are only punished for cheating by the type of man who's already stolen her from a floppy-wristed beta male. I love how these stories play up the hypocrisy of the experienced letch as he tut-tuts over modern morals while screwing young married women. This lovely snippet shows the landlord in 'The Tenant' to be a particular master of this:

I only once administered a genuine thrashing, and that was to a young divorcee I was having an affair with, who confessed to being unfaithful when I was away one weekend. I made her strip completely and bend over the back of a chair, with her hands grasping the seat; then gave her twelve with a riding switch, using full throttle. Halfway through the punishment she begged for temporary respite, which I refused.

It takes a special kind of arrogance to fuck another man's wife and then thrash her for cheating!
But really if you're a middle-class suburban husband you can't win. Even if you roast your wife's faithless behind and screw her senseless afterwards, it just makes her hornier and more likely to fall into the arms of the next man who rings the doorbell while you're at work! 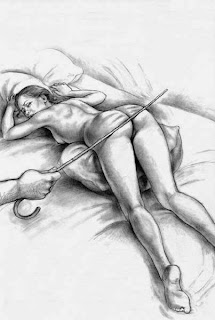 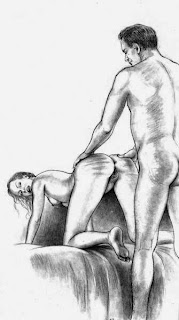