Like all British finishing schools, Birchwood Finishing School for Boys is built on a foundation of middle-class snobbery. Parents need to be willing to pay through the nose for their 18 year old sons to spend their days being taught (and thrashed) by sadistic masters and their evenings being bullied (and buggered) by 19-year-old bigger boys. All for the sake of not going to school with poor people!
Of course, boys are wired for mischief if they don't have their time filled with worthy pursuits. When they aren't sitting in long evening prep sessions with no talking and no toilet breaks, they are probably out on the sports field in freezing January mud. Even the swotty bookworms whose future lies in cramped offices doing all the real work while the muscular jocks get all the money and credit!

And in fact the sons of the wealthy are forced to go to school with poor people, as when they aren't swotting up or slogging on the sports field, they are required to help the ground staff with menial labout (unless exceptional sporting performance buys them a way out). Some might call it slave labour, but the Birchwood governors prefer to call it 'character building'. And the burly, uncouth staff certainly appreciate having a legion of middle-class boys at their beck and call. It's just like being in prison! 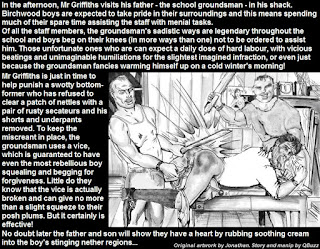 It has long surprised me that there isn't more spanking art set in school dormitories. Surely it's an extremely common fantasy - multiple miscreants dragged from their freezing, uncomfortable beds to be punished on the bare for some minor offence. At least now they'll have something to cry about (apart from their hellish existence far from home of course!)

It's almost guaranteed that the boys who are macho bullying jocks at school will go on to become macho bullying bosses in later life, and will get to have their fun with the wives of their nerdy subordinates. But they will have to be careful - as 'who you know' is the only thing more important than muscles and arrogance in this society... 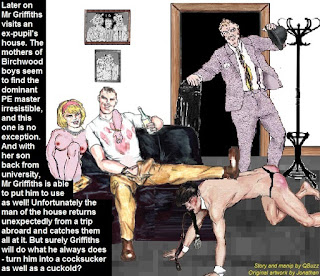 Though of course if you do cross the wrong person and end up doing time, it doesn't have to be all bad. As the Birchwood sports master finds out! 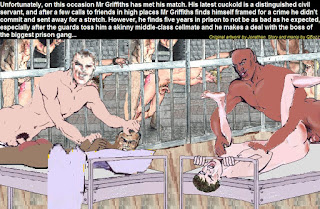