We all know how arousing spankings and canings are, for both the spanker and the spankee, both during and after! There's just something about posh English ladies getting thrashed (and more). Especially when they are also interfering do-gooders like Mrs Sarah Broadley: 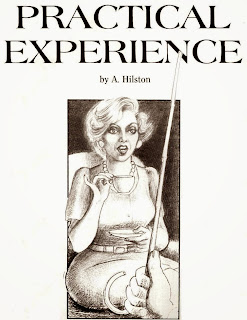 She has the nerve to interview a headmaster as part of an article she is writing against caning. He thinks the best way to inform her is to show her a senior schoolgirl getting caned. And then soon after he and his sadistically lovely little assistant Mary take advantage of the fact that there's something about the cane that lights a fire in stuck-up middle-class ladies...

Sarah moaned, 'Oh-h-h,' very softly, trying to imagine how the wretched girl must be feeling now. Her own plump cheeks clenched rigidly in sympathy, and a wickedly erotic tingle ran through her, to her amazement.
...
'That was a punishment. There are other ways to use the cane. I can show you quite quickly, if you like.' He took Sarah's arm and began to lead her to the old settee!
'Oh! But, I don't want to be caned!' Sarah protested loudly. And again that highly erotic tingle shot through her at the thought! And again Mr Marr sensed this instantly, and knew she was an ideal subject.
'Any writing is best done from experience,' he said gravely. 'I take it you have never been caned, Madam?'
'No,' Sarah shook her head. 'Never!' she admitted, still tingling.
'Well, then...' he urged Sarah gently towards the settee '...how can you possibly write on the subject. You may enjoy it; many ladies do, once they have had the experience.' He smiled knowingly.
Sarah wondered if she'd been missing something worthwhile all those years... And again that hot tingle! This time it ran through her nipples and lingered, making her feel quite breathless. A novel experience for her.
She allowed herself to be led to the settee without another word.

First the plump, well-dressed Sarah is given a light spanking to warm her up... 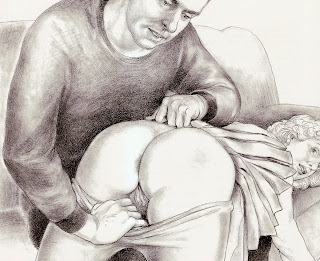 Poor Sarah lay there totally confused. Panting to breathe. Gasping furious objections no-one was taking any notice of. Jerking and rolling and kicking awkwardly. Bottom tingling hotly, and the sound of sharp slapping loud in her ears adding to the stinging sensation rapidly. Also, experiencing electric tingles internally that were well beyond any previous experience. Her buttocks felt far too big for her dress, and her bra was far too tight suddenly. And she couldn't do a thing!
Mr Marr was slapping the undercurve of her cheeks gaily.
Mary was sure Sarah was responding nicely. The fight was going out of her already. She was nowhere near as frantic now, though still she struggled vainly, ruining her elegant casual hairstyle.
When Mr Marr stopped spanking her Sarah was too breathless to object. She was too busy trying to deal with the fact that her nipples were madly sensitive and her pussy aching warmly. She moaned softly into the soft leather cushion her face was resting upon, indignant and confused.
Mr Marr glanced at Mary, a silent query. 'But, first...'
Sarah cried, 'NO!' as he quickly drew the hem of her dress up to reveal a pale green slip with a deep lacy trim. He took no notice as he did the same with her slip. Sarah realised what was going on and wailed 'No! Damn it!' not knowing she had surprised Mr Marr.
He hadn't expected French knickers... 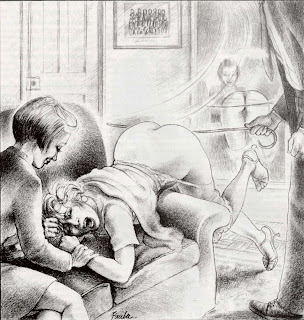 SHWITT! Mary swung with years of dislike in her stroke, and laid a fierce white line diagonally across the five Sarah already had, 'gating' her perfectly. Sarah squealed 'OW-w-w-w!' and tried to leap vertically up from the settee. This was impossible for a lady of her size and weight, of course. But she tried. Purely a reflex action, of course.
She then surprised them once again! Ladies of her undoubted high social standing do not pound their fists into the seat cushions of old settees. But Sarah did! Her expensively styled hair was a total wreck. But this was her last concern. She clamped both hands over her punished pink cheeks and rolled about wildly, moaning softly. Her main concern was to try to control the hot stinging sensation in her buttocks. She arched her back and raised her head, biting her lower lip as her weight pressed her taut breasts into the cushion beneath her. A fantastic electric sensation ran from her nipples to her toes and back to her hot pussy, leaving her gasping, confused. There was a faint tang of female arousal!

Mary excuses herself and then the headmaster shows himself to be quite the expert at teasing and tormenting married ladies:

Mr Marr guessed what Sarah's problems probably were now, from long experience of caning ladies. He began to search for some cream in the cupboard, giving her a chance to regain her composure and get her breath back a little. She did look a little harassed. 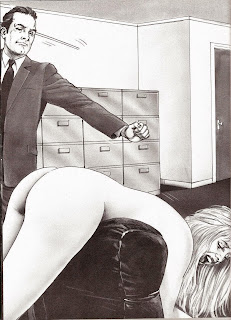 Sarah gasped as he stooped to apply the cream gently to her very attractive cheeks. She tried to wriggle away from his careful fingers awkwardly. But not for very long. She sighed and submitted thankfully.
'You'll feel much better in a moment, soon, Madam,' he said, in a soft, soothing voice. 'This cream will work wonders. Keep still, please.'
He went on applying cream to Sarah's ample buttocks, very gently.
'There!' he said, a few minutes later. 'How do you feel now?'
And yet again Sarah surprised him! She turned her head and glared up at him and said: 'You bastard! I feel hot and awkward, and as randy as hell – you know it.' Not a trace of her cultured accent now. She was furious, snapped, 'Well! What are you going to do about it? Don't just stand there, staring at me! You got me like this.'
Sarah turned her head away in disgust. Mr Marr glanced down at the base of her cleft and saw she was pouting beautifully. He was never a man to miss any opportunity, but he never took unfair advantage of any lady, either. He said: 'I'll put a little more cream on you.'
'Hmph!' Sarah wriggled as he did, then said, 'Oh-h-h!' as he put some cream expertly where it would do her the most good. Sarah spread her legs wider apart moaning softly deep in her throat, anticipating more attention. And getting it, expertly delivered. She was thrilled!
He smiled as Sarah began to respond wildly, still moaning softly. But not complaining. Panting a little now. His smile faded to a look of satisfaction. He had known Sarah would make an ideal subject as soon as he saw her, and he was rarely wrong. She was a live one, for sure.
Confidently now he reached under her breast with his free hand.
Sarah raised herself on one elbow to make it easy for him. She had sprung free from her light bra long before, and was almost out of her low dress by now. He gave her breast a friendly squeeze that wrung a low 'Ooh!' from her. Not surprise – appreciation. She was loving it!
He cupped her warm, moist pussy and gave it a nice gentle squeeze, to another low 'Oh-h-h' from Sarah. And some slow erotic wriggling. She made another low sound of pleasure as he found her nipple, firmly erect. She was very sensitive there. Each touch brought a low cry and an almost instant response between her legs. She became more moist.
There was only one possible conclusion, and it didn't take Sarah too long to reach it. She became rigid, moaned, and climaxed lustily!
Mr Marr, like the gentleman he was, made absolutely certain she was completely satisfied in every way possible. It was well after five p.m. when he walked her out to her car. 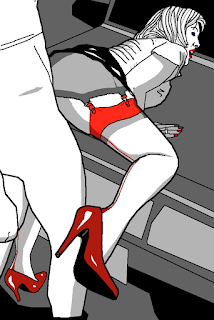 And even better, an oblivious Mr Broadley calls the next day, fully approving of his wife's 'punishment':


'Poor Sarah. Gated perfectly. She's a credit to you, sir. She was a bit reluctant to show me last night, at first. I put a little cold cream on it for her. She was most appreciative, later.'
Mr Marr stopped himself from saying, she was with me as well.

He even arranges for his friend's well-to-do wife to pay Mr Marr a similar visit! 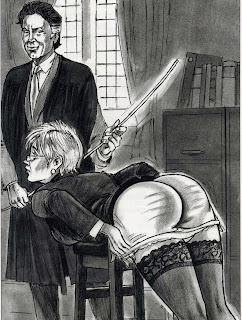