Kane and Blushes both featured different stories with the extremely enticing name 'Mother and Daughter'. 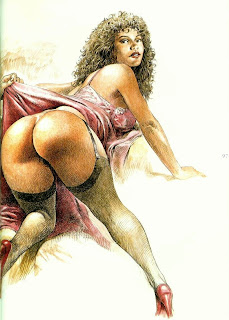 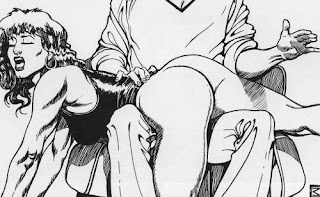 One of my favorite cuckolding scenarios that appears in British spanking mags is when daughters are packed off to disciplinarians while their mothers have some extramarital fun. It should already be clear that middle class ladies misbehaving is a massive turn on for me, plus there's the unfairness of the poor daughters getting their pert little bottoms spanked, caned and strapped, all so Mummy can satisfy her carnal urges without losing her veneer of suburban respectability.
The Blushes version was rather subtle in its description of the mother's indiscretion:

'As you will know, Fiona, I have had your parents here earlier this afternoon. That is always my practice, when I intend to cane a girl... 'Yes. Charming people. And your mother a very attractive woman.' Mr Branton leant forward slightly. 'I can tell you that they raised no objection... They agreed with me, Fiona, that a girl cannot be allowed to make liaisons with local youths'
...
Mr Branton's mantlepiece clock showing 3.15 when Elizabeth had breathlessly entered his sitting room. A visit she had kept to herself, saying nothing to Derek or indeed to Fiona. A visit to plead with Philip Branton. A woman of maturer years but still stunning. A beautiful blonde come to plead; to throw herself on his mercy for the sake of her daughter. 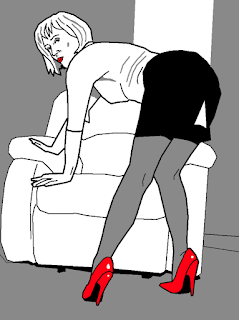 But Philip Branton, though quite clearly not unresponsive to Elizabeth Mayfield's charms, had remained adamant regarding the caning...
...
She stood, gasping and sobbing. On the pretty legs that didn't seem to want to support her. Mr Branton delivering his post-caning lecture. Observing as he did so that striking contrast between what was below and what was on top. Elizabeth Mayfield, of course, had been just the same in that regard.
In the Rover Elizabeth said, 'It was the caretaker. He found out I was seeing this boy. I wasn't doing a lot but it was strictly against the rules. So... I let him do what he wanted. Cane me. On the bare bottom. Does that excite you?'

'Yes.' Derek's hand pushed back in between her thighs. 'You never told me.' 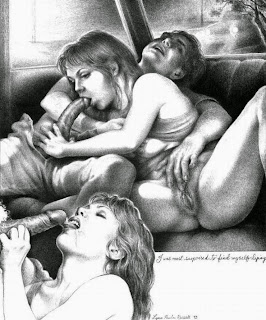 Elizabeth pursed her lips. She was thinking of the principal of Greentops School again. 'He's so big,' she breathed in the awe-filled voice.
Was Elizabeth Mayfield referring to Mr Branton's general bulk and the thought of his cane whipping down across poor Fiona's bottom? Or something else? That she herself had experienced. On Thursday of last week. Face down in the seat of that armchair. 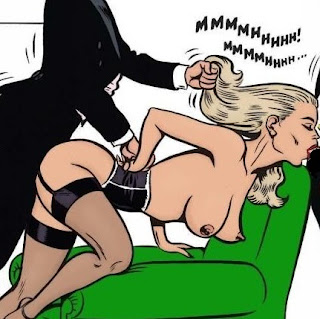 Remarkably enough, at this very moment as Jill lay over the Headmaster's lap, her mother was looking apprehensively at just such an implement which had caused Jill so much distress. A cane, no less. A cane in the hand of that gentleman who she had been so keen to see prosper in his business, Mr Calvino. The two of them were in Fiona Kendall's bedroom once again, Mr Calvino in slacks and shirt, Fiona in a blouse and below her waist not that new girdle which Jill had seen but this evening a black lace suspender belt attached to her sheer dark nylons. No skirt and  no knickers, so that her ripe haunches were fully and splendidly on view. 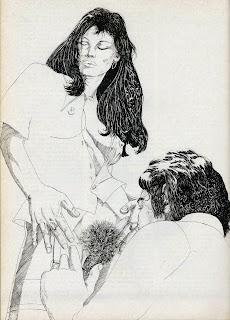 Needless to say, Mr Kendall was out for the evening — at his Club. Mr Calvino was in the process of describing to the nervous-looking Fiona the exquisite erotic pleasures to be obtained by submitting to a cane — such as the one he was flexing in his hands.
For matters had progressed somewhat between Mrs Kendall and the thrusting young manager of Beautybase. She had now on two occasions had full sexual intercourse with Mr Calvino, the first time being on his very next visit following the one observed by Jill. A fitting session in Fiona Kendall's bedroom as before and Jill's mother again stripped down to blouse and girdle and nylons. And again required to bend face-down over her bed so that Mr Calvino could check that the girdle had the correct 'give'. Only this time it had not been his hand which he slipped in between Fiona's parted thighs. 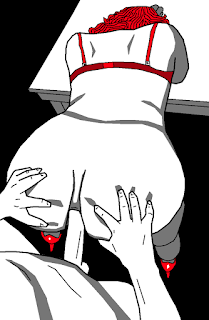 Fiona had gasped but not struggled to any great extent, and he had slid up into her with an ease which could imply that she had been ready and willing for this to happen. Though this she later denied both to Mr Calvino and herself, putting on the front of a shocked and innocent wife when Mr Calvino eventually finished performing. She had had, though, a full, almost mind-blowing orgasm such as she had never had with her husband.
In any event Mr Calvino was back for a further fitting the next afternoon during the course of which the same thing — sexual intercourse — again took place. And this evening, as daughter Jill argued in vain with her headmaster regarding Major Barker's use of the cane on her, Mr Calvino was back to, this time, use a cane on Fiona Kendall. Because as it happened, full and complete enjoyment of sexual pleasure with a woman for Mr Calvino involved a preliminary use of that same instrument which Jill Kendall had been complaining so bitterly about.
It was to this end, so that Fiona Kendall's magnificent bottom could be fully exposed for the cane, that he had brought, not the girdle, but the black lace suspender belt which, with very little else, Fiona was now wearing.
She was not at all happy with this new development. She had never been caned before and it was a decidedly alarming thought. It would obviously hurt! Mr Calvino said perhaps a little, but the caning of her bottom would undoubtedly arouse her sexual parts to a more exquisite enjoyment of the sexual act... As always with Mr Calvino she had no will to resist.
Fiona's face was down in her bed cover. My God! she thought, What am I doing! there was a pause and then a CRACK!.. as the cane whipped down on her succulent rear. 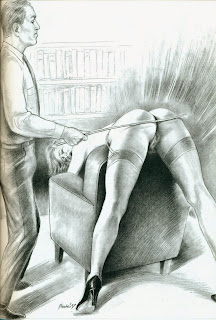 Fiona let out an anguished involuntary yelp: the succulent rear writhed. The stinging pain was excruciating...
But he gave her six. Wasn't that an old English custom: six of the best? (As it happened it was what daughter Jill had got from Major Barker.) And then Mr Calvino abandoned the cane and proceded to partake of the sexual part of his pleasure. Mrs Kendall, under him, responded with a desperate pleasure of her own. 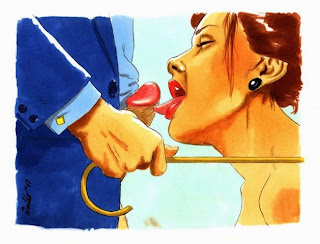 So matters settled down into something of a routine... 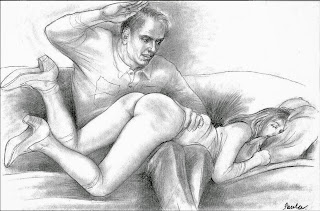 And Jill's mother? Her somewhat larger rump was getting the same treatment as her daughter's but rather more frequently: at least twice a week. It continued to hurt, to sting like mad, but for Fiona what came afterwards was more than adequate compensation. Because Mr Calvino was a very vigorous young man in that respect. And maybe he was right, the cane did seem to increase that subsequent sexual pleasure. 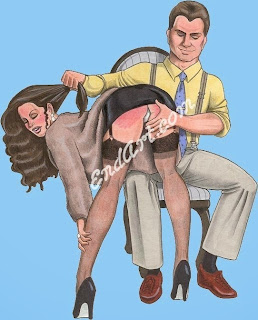 There was perhaps one bright spot for Jill. Her mother wrote to say that she thought after all Jill was right and she could forget about the girdle. Well, Mr Calvino was such a vigorous young man and Mrs Kendall would just hate to think of him casting his eyes over Jill's ripe young form. And just possibly getting ideas in that direction.

I think 'a full, almost mind-blowing orgasm such as she had never had with her husband' could almost be a slogan that encourages wives to cheat!
Posted by QBuzz at 14:34